Mistakes Were Made (but Not by Me) Third Edition: Why We Justify Foolish Beliefs, Bad Decisions, and Hurtful Acts (Paperback) 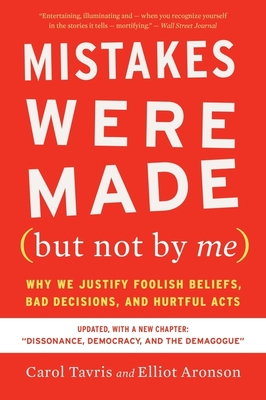 Mistakes Were Made (but Not by Me) Third Edition: Why We Justify Foolish Beliefs, Bad Decisions, and Hurtful Acts (Paperback)

“Entertaining, illuminating and—when you recognize yourself in the stories it tells—mortifying.” — Wall Street Journal

“Every page sparkles with sharp insight and keen observation. Mistakes were made—but not in this book!” — Daniel Gilbert, author of Stumbling on Happiness

Why is it so hard to say “I made a mistake”—and really believe it?

When we make mistakes, cling to outdated attitudes, or mistreat other people, we must calm the cognitive dissonance that jars our feelings of self-worth. And so, unconsciously, we create fictions that absolve us of responsibility, restoring our belief that we are smart, moral, and right—a belief that often keeps us on a course that is dumb, immoral, and wrong. Backed by years of research, Mistakes Were Made (But Not by Me) offers a fascinating explanation of self-justification—how it works, the damage it can cause, and how we can overcome it. This updated edition features new examples and concludes with an extended discussion of how we can live with dissonance, learn from it, and perhaps, eventually, forgive ourselves.

“A revelatory study of how lovers, lawyers, doctors, politicians—and all of us—pull the wool over our own eyes . . . Reading it, we recognize the behavior of our leaders, our loved ones, and—if we’re honest—ourselves, and some of the more perplexing mysteries of human nature begin to seem a little clearer.” — Francine Prose, O, The Oprah Magazine

ELLIOT ARONSON is one of the most distinguished social psychologists in the world. His books include The Social Animal and The Jigsaw Classroom. Chosen by his peers as one of the hundred most influential psychologists of the twentieth century, he was elected to the American Academy of Arts and Sciences and is the only psychologist to have won all three of the American Psychological Association’s top awards—for writing, teaching, and research. He lives in Santa Cruz, California.