Wild Game: My Mother, Her Secret, and Me (Paperback) 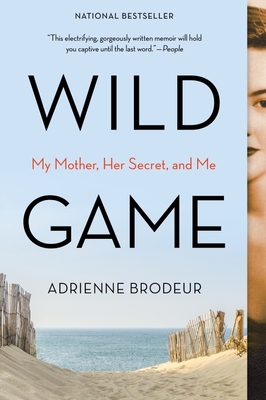 Wild Game: My Mother, Her Secret, and Me (Paperback)

“This extraordinary memoir is destined to become a classic in the genre. Brodeur is a gifted storyteller with a doozy of a story to tell, as she is 14 years old when her mother makes her complicit in the decade-long affair between her mother and her stepfather’s best friend. Everything about this book is rich—the setting on Cape Cod and the strong sense of place; the unforgettable character of Brodeur’s mother, the incomparable Malabar; cinematic moments that stop the reader in their tracks; and layer upon layer of provocative themes around mother-daughter relationships, family secrets, and identity. I can’t stop thinking about this book.”
— Allison Hill, Vroman's Bookstore, Pasadena, CA

A NATIONAL BESTSELLER. A daughter’s tale of living in the thrall of her magnetic, complicated mother, and the chilling consequences of her complicity.

On a hot July night on Cape Cod when Adrienne was fourteen, her mother, Malabar, woke her at midnight with five simple words that would set the course of both of their lives for years to come: Ben Souther just kissed me.

Adrienne instantly became her mother’s confidante and helpmate, blossoming in the sudden light of her attention, and from then on, Malabar came to rely on her daughter to help orchestrate what would become an epic affair with her husband’s closest friend. The affair would have calamitous consequences for everyone involved, impacting Adrienne’s life in profound ways, driving her into a precarious marriage of her own, and then into a deep depression. Only years later will she find the strength to embrace her life—and her mother—on her own terms.

Wild Game is a brilliant, timeless memoir about how the people close to us can break our hearts simply because they have access to them, and the lies we tell in order to justify the choices we make. It’s a remarkable story of resilience, a reminder that we need not be the parents our parents were to us.

“This electrifying, gorgeously written memoir will hold you captive until the last word.” —People

ADRIENNE BRODEUR began her career in publishing as the co-founder, along with filmmaker Francis Ford Coppola, of the fiction magazine Zoetrope: All-Story, which won the National Magazine Award for Best Fiction three times and launched the careers of many writers. She was a book editor at Houghton Mifflin Harcourt for many years and, currently, she is the Executive Director of Aspen Words, a program of the Aspen Institute. She has published essays in the New York Times. She lives in Cambridge with her husband and children.

A National Bestseller   A Best Book of 2019 from: NPR * BuzzFeed * Slate * People*  Chicago Public Library * Real Simple * Library Journal * Washington Post * Amazon * CBC   A Best of Fall Title from: People * Refinery29 * Entertainment Weekly * BuzzFeed * NPR’s On Point * Town & Country * Real Simple * New York Post * Palm Beach Post * Toronto Star * Orange Country Register * Bustle * Bookish * BookPage * Kirkus* BBC Culture* Debutiful   Winner of the New England Society Book Award   A Book of the Month Pick (September)  An Amazon Best of the Month/Spotlight Pick (October)  The Nervous Breakdown Book Club (October)  An Apple Best of the Month (October)  A Bookish “Kelly’s Pick” (Fall)  “Exquisite and harrowing . . . [WILD GAME] is so gorgeously written and deeply insightful, and with a line of narrative tension that never slacks, from the first page to the last, that it’s one you’ll likely read in a single, delicious sitting.” —New York Times Book Review  "Wild Game is a memoir, but it reads very much like a novel with a first-person narrator, bringing readers closely into scenes with vivid sensual detail that paints the atmosphere with the adoring eyes of the enthralled daughter the author once was. Wild Game, for all its luscious prose and tantalizing elements, is ultimately about the slow and painful process of losing a mother." —NPR   "This electrifying, gorgeously written memoir will hold you captive until the last word." —People, “Book of the Week”   "Brodeur is a deft memoirist, portraying Malabar as a woman traumatized by a violent parent and early tragedy. In this stunning tale of treachery—unsettling yet seductive—we are led through some of the darkest and most alluring corridors of the human heart." —O Magazine   "[A] vivid memoir…[Brodeur] writes beautifully, even tenderly, as a mother herself, aware of repercussions, knowing how it all ended." —BBC   "Perhaps everyone has a memoir in them—but only some lives are instant and undeniable blockbusters. Adrienne Brodeur’s is one...Brodeur tells a story so extraordinary, so juicy, and so well that your only option is to buy copies for your friends, too...The miracle of Wild Game is that Brodeur’s writing is as incredible as her story. Brodeur captures the emotional gradations in a tense room as deftly as she establishes the sea salt air and elaborate dinners of her childhood...[Wild Game] will undeniably be the book club pick of 2019." —Refinery29   “Adrienne Brodeur’s breathless memoir starts off with a bang…Every single turn of this memoir is gripping…Brodeur’s descriptions of her mother read like a paramour waxing rhapsodic, the recollections of someone in inescapable thrall…In Wild Game, Brodeur shows us that what defines our lives is choosing just how bound we want to be."” —San Francisco Chronicle   “Brodeur’s memoir has set both Hollywood and publishing ablaze.” —Entertainment Weekly   “Shocking, poignant, unputdownable.” —People Magazine   “It’s the kind of juicy what-is-happening memoir that just begs to be made into a movie.”— —