Committed: Dispatches from a Psychiatrist in Training (Hardcover) 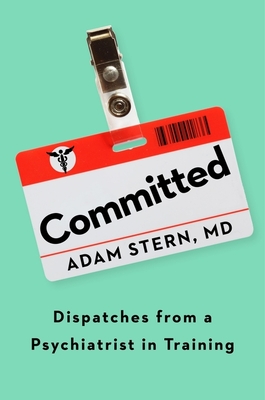 Grey’s Anatomy meets One L in this psychiatrist’s charming and poignant memoir about his residency at Harvard.

Adam Stern was a student at a state medical school before being selected to train as a psychiatry resident at one of the most prestigious programs in the country. His new and initially intimidating classmates were high achievers from the Ivy League and other elite universities around the nation. Faculty raved about the group as though the residency program had won the lottery, nicknaming them “The Golden Class,” but would Stern ever prove that he belonged?

In his memoir, Stern pulls back the curtain on the intense and emotionally challenging lessons he and his fellow doctors learned while studying the human condition, and ultimately, the value of connection. The narrative focuses on these residents, their growth as doctors, and the life choices they make as they try to survive their grueling four-year residency. Rich with drama, insight, and emotion, Stern shares engrossing stories of life on the psychiatric wards, as well as the group’s experiences as they grapple with impostor syndrome and learn about love and loss. Most importantly, as they study how to help distressed patients in search of a better life, they discover the meaning of failure and the preciousness of success.

Stern’s growth as a doctor, and as a man, have readers rooting for him and his patients, and ultimately find their own hearts fuller for having taken this journey with him.

ADAM STERN, MD, is a psychiatrist at Beth Israel Deaconess Medical Center and an assistant professor of psychiatry at Harvard Medical School. He has written extensively about his experience as a physician including in the New York Times, the Boston Globe, the New England Journal of Medicine, the Journal of the American Medical Association, and the American Journal of Psychiatry. He lives with his family near Boston.

"By turns funny and tragic, Committed pulls back the curtain on what it takes to become a psychiatrist–and how the practitioners, or the good ones, anyway, can put their own sanity on the line in the service of healing others." —People, Book of the Week pick

"A mesmerizing memoir...[Stern] paints sensitive and often touching portraits of his patients, who dealt with everything from paranoia to anorexia to severe depression...Compassionate and candid, this is as human as it gets."—Publishers Weekly, STARRED

"[A] dynamic debut memoir...As the author vividly captures the urgency, chaos, and eerie fascination involved with the treatment of mental illness, he also candidly shares numerous patient portraits, which provide some of the most moving and disturbing moments in the book...The combination of patient case studies and medical trainee journal creates an intense reading experience and an eye-opening appreciation for medical professionals charged with psychiatric care. Residents and those contemplating a career in mental health will find much to glean from this spirited memoir of dedication and dogged determination...Engrossing, indelible, and brimming with genuine humanity."—Kirkus, STARRED

"With high-stakes drama, interesting characters, and a predictably appealing protagonist, it's no wonder that medical memoirs are often compelling reading. Stern's is no exception as he recalls his four years of psychiatric residency training at Harvard...A sensitive chronicle about becoming a doctor and the value of human connection and empathic listening."—Booklist

"This book is a fascinating look at the inside of a medical residency, and it offers a glimpse of many of the often-understated personal costs involved...Readers who have also experienced the vigor of professional academic training will find Stern’s account familiar and satisfying, while those who haven’t will get a rare and insightful glimpse into the many potential struggles involved...This well-written, engaging book will have a special appeal to those already in academia and will be of interest to those who are considering it." —Library Journal