Lintang and the Pirate Queen (Paperback) 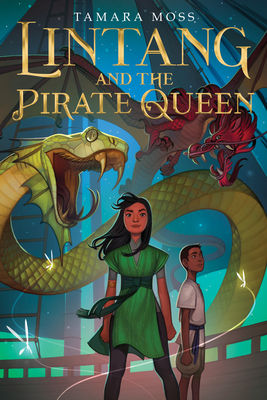 Lintang and the Pirate Queen (Paperback)


Available in Warehouse. Wait for Email Confirmation for ETA
Gutsy girls and strong women make up the diverse and appealing crew of a pirate ship that battles intrigue and deadly monsters in an action-filled fantasy adventure.

“Combine a pirate adventure of mythic proportions, a uniquely charming cast of characters, and a vivid new fantasy world, and you get Lintang and the Pirate Queen. Magical, inventive, and positively unforgettable.” —Marissa Meyer, best-selling author of The Lunar Chronicles

Lintang is an island girl who longs for daring and danger. When she meets the feared pirate Captain Shafira and her all-female crew, Lintang is determined to join them. Secrets within secrets, life-or-death battles with spectacular monsters, and hair’s breadth escapes keep readers turning the pages of a story populated by women of color who are fighters, adventurers, and leaders.
Tamara Moss is an author and teacher whose hobbies include writing, reading, and reading about writing. She lives in Perth, Australia.
www.tamaramoss.com.au
Twitter: @writermoss
Instagram: @writermoss

? "Moss’s smooth, sensory prose carries readers through the story as fluidly as Shafira’s ship navigates the waters around the United Regions...A particularly well-crafted, solid fantasy adventure." —School Library Journal, STARRED Review   "In a cast of powerful and charmingly eccentric female characters, high-spirited Lintang distinguishes herself with a vulnerability and, often, immaturity that slowly gives way to burgeoning leadership. Women of color take center stage in this fast-paced adventure about friendship, loyalty, and defiantly fighting for one’s destiny."—Publishers Weekly   "The world Lintang resides in is inventive and nicely established... and the story is an immersive delight for any fan of fantasy fiction."—Booklist   "An imaginative premise."—Kirkus   "Fans of adventure on the roiling seas will find a lot to love in this Australian import. Reading like a cross between Moana and Pirates of the Caribbean, the swiftly moving plot is action packed, with plenty of on-deck swordfights, near-escapes, monsters, and magic."—The Bulletin of the Center for Children's Books     —