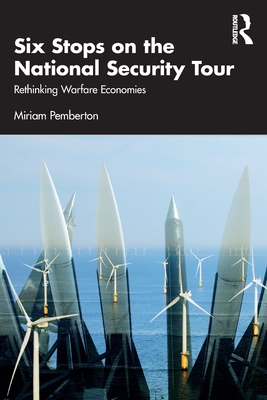 The U.S. military economy incorporates hundreds of American communities. This is the first book to connect our national security apparatus to the local level via deeply reported portraits of six carefully selected locations, including military Meccas and out-of-the-way places. They are woven into the warfare economy by bases, nuclear weapons labs, and production sites. The book includes an invaluable overview of how the military is structured, how its budget is made, and what it costs. It also shows how the military economy perpetuates itself. In on-the-ground reporting, Pemberton traces the lines of connection between the tour stops presented here and our country's foreign policy, industrial policy, and budget priorities. She examines the meaning of national security in the current moment, as climate change becomes what the military itself calls "an urgent and growing threat." And she dramatically demonstrates how redirecting our militarized foreign and industrial policy toward climate security can help these communities become part of the solution. For students, scholars, public servants, and all concerned citizens, this book is essential reading.

Miriam Pemberton has studied the U.S. military economy and the means of shrinking it down to size for decades, fi rst as Director of the National Commission for Economic Conversion and Disarmament and then as a Research Fellow at the Institute for Policy Studies. With Lawrence Korb, she headed the task force that for a decade produced the annual "Unified Security Budget of the United States." With William Hartung she edited Lessons from Iraq: Avoiding the Next War (Paradigm, 2008). She headed up the team that produced three successive versions of "Military vs. Climate Security: The Budgets Compared." Pemberton holds a PhD from the University of Michigan.