A Political Ecology of Forest Conservation in India: Communities, Wildlife and the State (Hardcover) 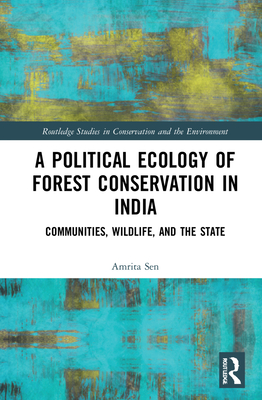 A Political Ecology of Forest Conservation in India: Communities, Wildlife and the State (Hardcover)

This book critically explores the political ecology of human marginalization, wildlife conservation and the role of the state in politicizing conservation frameworks, drawing on examples from forests in India.

The book specifically demonstrates the nuances within human-environmental linkages, by showing how environmental concerns are not only ecological in content but also political. In India a large part of the forests and their surrounding areas were inhabited far before they were designated as protected areas and inviolate zones, with the local population reliant on forests for their survival and livelihoods. Thus, socioecological conflicts between the forest dependents and official state bodies have been widespread. This book uses a political ecology lens to explore the complex interplay between current norms of forest conservation and environmental subjectivities, illustrating contemporary articulation of forest rights and the complex mediations between forest dependents and different state and non-state bodies in designing and implementing regulatory standards for wildlife and forest protection. It foregrounds the issues of identity, migration and cultural politics while discussing the politics of conservation. Through a political ecology approach, the book not only is human-centric but also makes significant use of the role of non-humans in foregrounding the conservation discourse, with a particular focus on tigers.

The book will be of great interest to students and academics studying forest conservation, human-wildlife interactions and political ecology.

Amrita Sen is Assistant Professor of Sociology at the Indian Institute of Technology Kharagpur and Visiting Faculty with Azim Premji University, India. Her research interests include cultural and political ecology, politics of forest conservation, urban environmental conflicts and Anthropocene studies. In 2019, she received the 'Excellence in PhD Thesis award' from the Indian Institute of Technology Bombay, for her doctoral research on the conservation politics in Sundarbans.