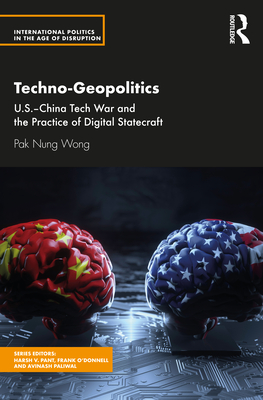 Techno-Geopolitics explores contemporary U.S.-China relations and the future of global cyber-security through the prisms of geopolitics and financial-technological competition. It puts forward a new conceptual framework for an emerging field of digital statecraft and discusses a range of key issues including the controversies around 5G technology, policy regulations over TikTok and WeChat, the emergence of non-traditional espionage, and potential trends in post-pandemic foreign policy.

Analysing the ramifications of the ongoing U.S.-China trade standoff, this book maps the terrain of technological war and the race for global technological leadership and economic supremacy. It shows how China's technological advancements not only have been the key to its national economic development but also have been the core focus of U.S. intelligence. Further, it draws on U.S.-China counterintelligence cases sourced from the U.S. Department of Justice and Federal Bureau of Investigation (FBI) to explore emerging patterns and techniques of China's espionage practice.

A cutting-edge study on the future of statecraft, this volume will be of great interest to scholars and researchers of international relations, security and intelligence studies, information technology and artificial intelligence and political science, especially U.S. foreign policy and China studies. It will also be of great interest to policymakers, career bureaucrats, security and intelligence practitioners, technology regulators, and professionals working with think tanks and embassies.

Pak Nung Wong teaches politics and international relations at the University of Bath, U.K. His recent publications include Destined Statecraft: Eurasian Small Power Politics and Strategic Cultures in Geopolitical Shifts (2018), Discerning the Powers in Post-Colonial Africa and Asia: A Treatise of Christian Statecraft (2016), Post-Colonial Statecraft in South East Asia: Sovereignty, State-Building and the Chinese in the Philippines (2013). He is Editor-in-Chief of Bandung: Journal of the Global South, which he founded with an international network of scholars, practitioners and policymakers in 2013. Apart from publishing in the English language, Dr Wong's Chinese-language columns in Hong Kong-based media have been followed, translated and used by governmental ministries in foreign affairs, defence, security and intelligence services, culture and religion, technology and higher education across the world.