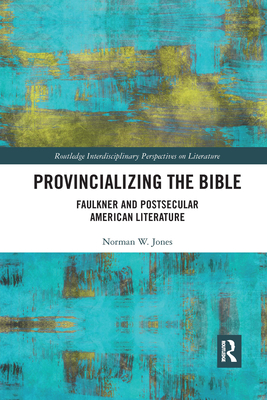 Why, in our supposedly secular age, does the Bible feature prominently in so many influential and innovative works of contemporary U.S. literature? More pointedly, why would a book indelibly allied with a long history of institutionalized oppressions play a supporting role--and not simply as an object of critique--in a wide variety of landmark literary representations of marginalized subjectivities? The answers to these questions go beyond mere playful re-appropriations or subversive resignifications of biblical themes, figures, and forms. This book shows how certain contemporary authors invoke the Bible in ways that undermine clear distinctions between subversive and traditional--indeed, that undermine clear distinctions between secular and sacred. By tracing a key source of such complex literary invocations of the Bible back to William Faulkner's major novels, Provincializing the Bible argues that these literary works, which might be termed postsecular, ironically provincialize the Bible as a means of reevaluating and revalorizing its significance in contemporary American culture.

Norman W. Jones is Associate Professor of English at The Ohio State University. Author of The Bible and Literature: The Basics as well as Gay and Lesbian Historical Fiction: Sexual Mystery and Post-Secular Narrative, he is also co-editor of The King James Bible after 400 Years: Literary, Linguistic, and Cultural Influences.