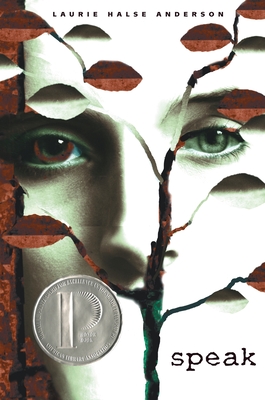 The extraordinary, groundbreaking novel from Laurie Halse Anderson, with more than 2.5 million copies sold, and the basis for the 2004 film of the same name starring Kristen Stewart!

The first ten lies they tell you in high school.

"Speak up for yourself--we want to know what you have to say." From the first moment of her freshman year at Merryweather High, Melinda knows this is a big fat lie, part of the nonsense of high school. She is friendless, outcast, because she busted an end-of-summer party by calling the cops, so now nobody will talk to her, let alone listen to her. As time passes, she becomes increasingly isolated and practically stops talking altogether. Only her art class offers any solace, and it is through her work on an art project that she is finally able to face what really happened at that terrible party: she was raped by an upperclassman, a guy who still attends Merryweather and is still a threat to her. Her healing process has just begun when she has another violent encounter with him. But this time Melinda fights back, refuses to be silent, and thereby achieves a measure of vindication.

In Laurie Halse Anderson's powerful novel, an utterly believable heroine with a bitterly ironic voice delivers a blow to the hypocritical world of high school. She speaks for many a disenfranchised teenager while demonstrating the importance of speaking up for oneself.

Laurie Halse Anderson is a New York Times-bestselling author whose writing spans young readers, teens, and new adults. Combined, her books have sold more than 8 million copies. She has been nominated three times for the Astrid Lindgren Memorial Award. Two of her books, Speak and Chains, were National Book Award finalists, and Chains was short-listed for the prestigious Carnegie medal. Laurie was selected by the American Library Association for the 2009 Margaret A. Edwards Award and has been honored for her battles for intellectual freedom by the National Coalition Against Censorship and the National Council of Teachers of English.

In addition to combating censorship, Laurie regularly speaks about the need for diversity in publishing. She lives in Philadelphia, where she enjoys cheese steaks while she writes.

One of TIME Magazine's Best YA Books of All Time

One of Cosmopolitan Magazine's 125 Best YA Books Everyone Should Read, Regardless of Age

“In a stunning first novel, Anderson uses keen observations and vivid imagery to pull readers into the head of an isolated teenager. . . . Yet Anderson infuses the narrative with a wit that sustains the heroine through her pain and holds readers' empathy. . . . But the book's overall gritty realism and Melinda's hard-won metamorphosis will leave readers touched and inspired.” —Publishers Weekly, Starred Review

“An uncannily funny book even as it plumbs the darkness, Speak will hold readers from first word to last.” —The Horn Book, Starred Review

“A frightening and sobering look at the cruelty and viciousness that pervade much of contemporary high school life, as real as today's headlines. . . . The plot is gripping and the characters are powerfully drawn . . . a novel that will be hard for readers to forget.” —Kirkus Reviews, Pointer Review

“Melinda's pain is palpable, and readers will totally empathize with her. This is a compelling book, with sharp, crisp writing that draws readers in, engulfing them in the story.” —School Library Journal

“Melinda's voice is distinct, unusual, and very real as she recounts her past and present experiences in bitterly ironic, occasionally even amusing vignettes. . . . Melinda's sarcastic wit, honesty, and courage make her a memorable character whose ultimate triumph will inspire and empower readers.” —Booklist