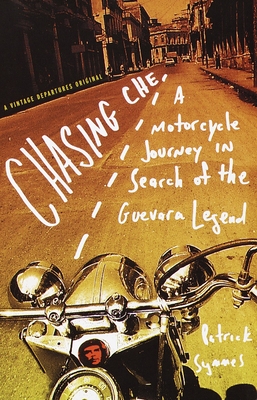 
This title is likely unavailable. Email or call for price and availability.
Intrepid journalist Patrick Symmes sets off on his BMW R80 G/S in search of the people and places in Ernesto "Che" Guevara's classic Motorcycle Diaries, seeking out his own adventure as well as the legacy of the icon Che would become, Symmes retraces the future revolutionary's path.  And on the way he runs out of gas in an Argentine desert, talks a Peruvian guerrilla out of taking him hostage, wipes out in the Andes, and, in Cuba, drinks himself blind with Che's travel partner, Alberto Granado.

Here is the unforgettable story of a wanderer's quest for food, shelter, and wisdom. Here, too, is the portrait of a continent whose dreams of utopia give birth not only to freedom fighters, but also to tyrants whose methods include torture and mass killing. Masterfully detailed, insightful, unforgettable, Chasing Che transfixes us with the glory of the open road, where man and machine traverse the unknown in search of the spirit's keenest desires.
Patrick Symmes writes for Outside, New York, and Conde Nast Traveler magazines. He lives in New York City.