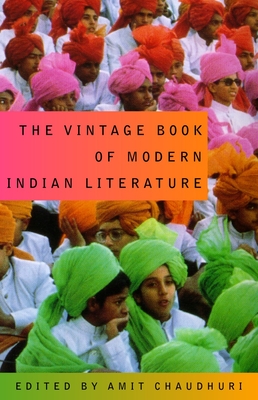 
Available in Warehouse. Wait for Email Confirmation for ETA
In recent years American readers have been thrilling to the work of such Indian writers as Salman Rushdie and Vikram Seth. Now this extravagant and wonderfully discerning anthology unfurls the full diversity of Indian literature from the 1850s to the present, presenting today’s brightest talents in the company of their distinguished forbearers and likely heirs.

The thirty-eight authors collected by novelist Amit Chaudhuri write not only in English but also in Hindi, Bengali, and Urdu. They include Rabindranath Tagore, arguably the first international literary celebrity, chronicling the wistful relationship between a village postal inspector and a servant girl, and Bibhuti Bhushan Banerjee, represented by an excerpt from his classic novel about an impoverished Bengali childhood, Pather Panchali. Here, too, are selections from Nirad C. Chaudhuri’s Autobiography of an Unknown Indian, R. K. Narayan’s The English Teacher, and Salman Rushdie’s Midnight’s Children alongside a high-spirited nonsense tale, a drily funny account of a pre-Partition Muslim girlhood, and a Bombay policier as gripping as anything by Ed McBain. Never before has so much of the subcontinent’s writing been made available in a single volume.
Amit Chadhuri lives in Calcutta.
“A very lucid and engaging selection that, for the first time, sets the quite extraordinary phenomenon of Indian writing . . . in clear context.” —The Spectator