The Shape of a Pocket (Vintage International) (Paperback) 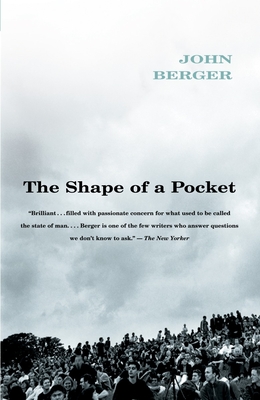 The Shape of a Pocket (Vintage International) (Paperback)


Available in Warehouse. Wait for Email Confirmation for ETA
From Booker Prize-winning author John Berger, a collection of essays that explores the relationship of art and artists and includes examinations of the work of Brancusi, Degas, Michelangelo, and Frida Kahlo, among others.

The pocket in question is a small pocket of resistance. A pocket is formed when two or more people come together in agreement. The resistance is against the inhumanity of the New World Economic Order. The people coming together are the reader, me, and those the essays are about–Rembrandt, Paleolithic cave painters, a Romanian peasant, ancient Egyptians, an expert in the loneliness of a certain hotel bedroom, dogs at dusk, a man in a radio station. And unexpectedly, our exchanges strengthen each of us in our conviction that what is happening in the world today is wrong, and that what is often said about it is a lie. I’ve never written a book with a greater sense of urgency.
–John Berger
John Berger was born in London in 1926. He is well known for his novels and stories as well as for his works of nonfiction, including several volumes of art criticism. His first novel, A Painter of Our Time, was published in 1958, and since then his books have included Ways of Seeing, the fiction trilogy Into Their Labours, and the novel G., which won the Booker Prize in 1972. In 1962 he left Britain permanently, and lived in a small village in the French Alps. He died in 2017.