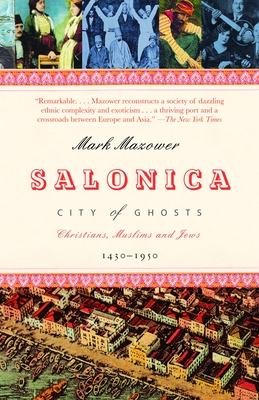 
Available in Warehouse. Wait for Email Confirmation for ETA
Salonica, located in northern Greece, was long a fascinating crossroads metropolis of different religions and ethnicities, where Egyptian merchants, Spanish Jews, Orthodox Greeks, Sufi dervishes, and Albanian brigands all rubbed shoulders. Tensions sometimes flared, but tolerance largely prevailed until the twentieth century when the Greek army marched in, Muslims were forced out, and the Nazis deported and killed the Jews. As the acclaimed historian Mark Mazower follows the city’s inhabitants through plague, invasion, famine, and the disastrous twentieth century, he resurrects a fascinating and vanished world.

Mark Mazower is professor of history at Columbia University and Birkbeck College, London. He is the author of Inside Hitler’s Greece: The Experience of Occupation, 1941–44, winner of the Fraenkel Prize in Contemporary History and the Longman/History Today Award for Book of the Year. He lives in New York City.

“Remarkable. . . . Mazower reconstructs a society of dazzling ethnic complexity and exoticism . . . .a thriving port and a crossroads between Europe and Asia.” —The New York Times

“An exhaustive, affectionate biography of the city, a deeply researched account that becomes a portrait of the singular, vanished cosmopolitanism of the Ottoman Empire.” —The Baltimore Sun

“A masterpiece. . . . A masterly synthesis of cultural, political, economic, intellectual, and social history. . . . A book to bring one to tears.” —The Boston Globe

“A history of a fascinating, turbulent city by one of the most distinguished historians of his generationÉMazower has provided a brilliant guide to Salonica’s rich past.”—The New York Review of Books

“Timely, magnificent and sometimes unbearably poignant . . . Brings alive a lost world, one with much to teach contemporary Europe about the nature of identity and nationality.”—The Nation

“[A] tremendous book about a city unique not just in Europe, but in the entire history of humanity. . .What [Mazower] does to perfection is to express the historical meaning of Salonica down the generations, authenticating his story with a multitude of contemporary quotations, from the 15th to the 20th century, and scrupulously explaining it all out of his profound scholarly
knowledge. ”—Jan Morris, The Guardian

"Mark Mazower's new book is a necessary masterpiece; necessary because it fills a gap, and a masterpiece because it fills that gap so well. It is written in bite-sized pieces that make the book a pleasure to read, and, since one cannot resist reading the next section, curiously moreish. It sustained me recently during a long trip to the US, continually delivering small pleasures whenever I had a moment in hand."-—Louis de Bernieres, Times of London

"Enthralling new history . . . In a brilliant chapter on popular culture in the interwar years, Mazower shows how the development of a modern urban culture -- in dance, music, art, literature and, most importantly, sex -- began to turn a city of exiles and refugees into a place that could be called home. . . Tragic, hopeful and beautifully written, Salonica, City of Ghosts shows how cities, as much as people, can be seduced by the prospect of escaping their own past and remaking themselves in ways unrecognizable to old friends." —Charles King, Times Literary Supplement

"[Mazower] sensitively analyses the internal debates and divisions which could be found within all the major communities." —Noel Malcolm, Sunday Telegraph

"Masterly . . . draws on many new sources: the diary of a Ukraninian refugee in the 1720s; consuls' despatches; the files of the Jewish Museum of Greece. This is a brilliant and timely reminder that cities have played as important a role as states in the lives of their inhabitants."—Philip Mansel, The Spectator

"A brilliant reconstruction of one of Europe's great meeting places between the three monotheistic faiths."—The Economist

"Mazower is a formidable historian. Two of his earlier books, Inside Hitler's Greece and The Balkans: A Short History, rank as definitive works. He has produced a majestic work: the biography of a city, complete with soul and ichor."—Moris Farhi, The Independent

"Salonica, City of Ghosts, is a wonderful evocation of the complex, glorious and tragic history of a city, with lessons both positive and negative for our present age. The author, as always, writes with compelling clarity and penetrating eye for detail. If the past is another country, the author allows us to travel there." —Anthony Daniels, "Books of the Year," Sunday Telegraph

"This exploration into the soul of a Balkan ciy is both evocative and profound, a masterful addition to Mazower's work." —Jad Adams, BBC History (Salonica was their book of the month for October.)