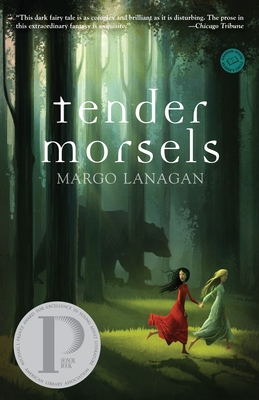 
This title is likely unavailable. Email or call for price and availability.
Tender Morsels is a dark and vivid story, set in two worlds and worrying at the border between them. Liga lives modestly in her own personal heaven, a world given to her in exchange for her earthly life. Her two daughters grow up in this soft place, protected from the violence that once harmed their mother. But the real world cannot be denied forever—magicked men and wild bears break down the borders of Liga’s refuge. Now, having known Heaven, how will these three women survive in a world where beauty and brutality lie side by side?
Margo Lanagan’s story collection, Red Spikes, was a Publishers Weekly Best Book and a Horn Book Fanfare, and Black Juice was a Printz Honor Book. She lives in Sydney, Australia.
Starred Review, Booklist, August 1, 2008:
“A marvel to read and will only further solidify Lanagan’s place at the very razor’ s edge of YA speculative fiction.”

Starred Review, The Horn Book Magazine, September/October 2008:
"Lanagan's poetic style and her masterful employment of mythic imagery give this story of transformation and healing extraordinary depth and beauty."

Starred Review, Publishers Weekly, September 8, 2008:
"Lanagan explores the savage and the gentlest sides of human nature, and how they coexist."

Starred Review, Kirkus Reviews, September 15, 2008:
"By turns horrifying and ribald, witty and wise, this tour de force of a novel almost demands multiple readings to fully appreciate each of its layers."

Starred Review, School Library Journal, November 2008:
"Beautifully written and surprising, this is a novel not to be missed."