The Nine Pound Hammer: Book 1 of The Clockwork Dark (Paperback) 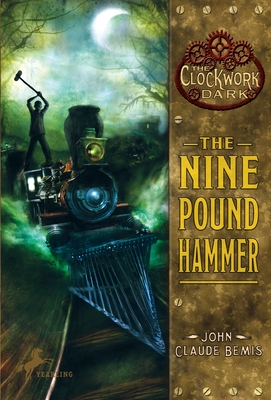 The Nine Pound Hammer: Book 1 of The Clockwork Dark (Paperback)

This is book number 1 in the The Clockwork Dark series.

What if John Henry had a son?

Twelve-year-old Ray is haunted by the strangest memories of his father, whom Ray swears could speak to animals. Now an orphan, Ray jumps from a train going through the American South and falls in with a medicine show train and its stable of sideshow performers. The performers turn out to be heroes, defenders of the wild, including the son of John Henry. They are hiding the last of the mythical Swamp Sirens from an ancient evil known as the Gog. Why the Gog wants the Siren, they can’t be sure, but they know it has something to do with rebuilding a monstrous machine that John Henry gave his life destroying years before, a machine that will allow the Gog to control the will of men and spread darkness throughout the world.
John Claude Bemis began his writing career as a songwriter, and through oldtime country and blues music, began to explore how Southern folklore could become epic fantasy. John lives with his family in Hillsborough, North Carolina, where he teaches his favorite books to elementary school students. Visit his Web site at www.johnclaudebemis.com.
Tom Angleberger, author of The Strange Case of Origami Yoda:
"A rigorous adventure set in our own country’s folkloric past, when the sons of John Henry and Little Bill fought a desperate, fantastical battle for the soul of America. A series which any self-respecting middle school book nerd would wolf down eagerly."

Books Ahoy:
"This is one of the best books I ever read! There are many twists and turns throughout the novel that kept me on the edge of my seat. Once I started I couldn't put it down until I was finished."