Notes from a Small Island (Paperback) 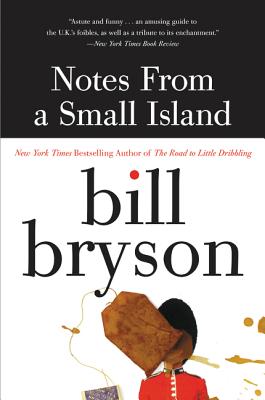 Notes from a Small Island (Paperback)

Featuring an all-new cover, New York Times bestseller Bill Bryson's irrevent and hilarious journey through the beloved island nation he called home for two decades. From Downing Street to Loch Ness, this is a delightful look at the United Kingdom.

Before New York Times bestselling author Bill Bryson wrote The Road to Little Dribbling, he took this delightfully irreverent jaunt around the unparalleled floating nation of Great Britain, which has produced zebra crossings, Shakespeare, Twiggie Winkie’s Farm, and places with names like Farleigh Wallop and Titsey.

Bill Bryson's bestselling books include One Summer, A Short History of Nearly Everything, At Home, A Walk in the Woods, Neither Here nor There, Made in America, and The Mother Tongue. He lives in England with his wife.