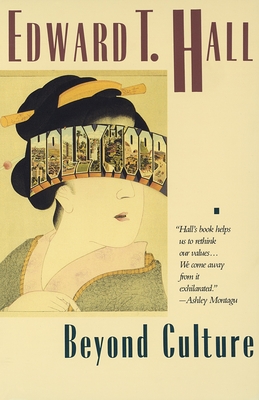 From a renowned American anthropologist comes a proud celebration of human capacities. For too long, people have taken their own ways of life for granted, ignoring the vast, international cultural community that srrounds them. Humankind must now embark on the difficult journey beyond culture, to the discovery of a lost self a sense of perspective. By holding up a mirror, Hall permits us to see the awesome grip of unconscious culture. With concrete examples ranging from James Joyce's Finnegans Wake to the mating habits of the bowerbird of New Guinea, Hall shows us ourselves. Beyond Culture is a book about self-discovery; it is a voyage we all must embark on if mankind is to survive.

"Fascinating and emotionally challenging. . . . The book's graceful, non-technical style and the many illuminating, real-life illustrations make it a delight to read." —Library Journal

"Hall's book helps us to rethink our values. . . . We come away from it exhilarated." —Ashley Montagu

"In this penetrating analysis of the culturally determined yet 'unconscious' attitudes that mold our thought, feeling, communication and behavior. . . . Hall makes explicit taken-for-granted linguistic patterns, body rhythms, personality dynamics, educational goals. . . . Many of Hall's ideas are original and incisive . . . [and] should reward careful readers with new ways of thinking about themselves and others." —Publishers Weekly

"A fascintaing book which stands beside The Hidden Dimension and The Silent Language to prove Hall one of the most original anthropologists of our era." —Paul Bohannan

Edward T. Hall was a widely traveled anthropologist whose fieldwork took him all over the world—from the Pueblo cultures of the American Southwest to Europe and the Middle East. As director of the State Department’s Point Four Training Program in the 1950s, Dr. Hall’s mission was to teach foreign-bound technicians and administrators how to communicate effectively across cultural boundaries. He was a consultant to architects on human factors in design and to business and government agencies in the field of intercultural relations, and had taught at the University of Denver, Bennington College, the Washington School of Psychiatry, the Harvard Business School, the Illinois Institute of Technology, and Northwestern University.
Dr. Hall was born in Webster Groves, Missouri. He received an A.B. degree from the University of Denver, and M.A. from the University of Arizona, and a Ph.D. in anthropology from Columbia University. He lived in Santa Fe, New Mexico, until his death in 2009.