A Leaf In The Bitter Wind: A Memoir (Paperback) 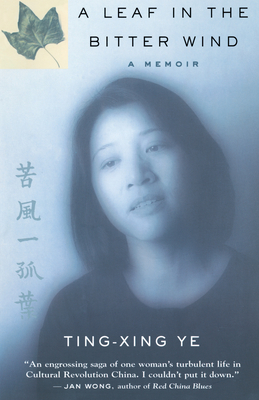 A Leaf In The Bitter Wind: A Memoir (Paperback)


This title is likely unavailable. Email or call for price and availability.
One of the best ways to understand history is through eye-witness accounts. Ting-Xing Ye’s riveting first book, A Leaf in the Bitter Wind, is a memoir of growing up in Maoist China. It was an astonishing coming of age through the turbulent years of the Cultural Revolution (1966 - 1974).

In the wave of revolutionary fervour, peasants neglected their crops, exacerbating the widespread hunger. While Ting-Xing was a young girl in Shanghai, her father’s rubber factory was expropriated by the state, and he was demoted to a labourer. A botched operation left him paralyzed from the waist down, and his health deteriorated rapidly since a capitalist’s well-being was not a priority. He died soon after, and then Ting-Xing watched her mother’s struggle with poverty end in stomach cancer. By the time she was thirteen, Ting-Xing Ye was an orphan, entrusted with her brothers and sisters to her Great-Aunt, and on welfare.

Still, the Red Guards punished the children for being born into the capitalist class. Schools were being closed; suicide was rampant; factories were abandoned for ideology; distrust of friends and neighbours flourished. Ting-Xing was sent to work on a distant northern prison farm at sixteen, and survived six years of backbreaking labour and severe conditions. She was mentally tortured for weeks until she agreed to sign a false statement accusing friends of anti-state activities. Somehow finding the time to teach herself English, often by listening to the radio, she finally made it to Beijing University in 1974 as the Revolution was on the wane — though the acquisition of knowledge was still frowned upon as a bourgeois desire and study was discouraged.

Readers have been stunned and moved by this simply narrated personal account of a 1984-style ideology-gone-mad, where any behaviour deemed to be bourgeois was persecuted with the ferocity and illogic of a witch trial, and where a change in politics could switch right to wrong in a moment. The story of both a nation and an individual, the book spans a heady 35 years of Ye’s life in China, until her eventual defection to Canada in 1987 — and the wonderful beginning of a romance with Canadian author William Bell. The book was published in 1997.

The 1990s saw the publication of several memoirs by Chinese now settled in North America. Ye’s was not the first, yet earned a distinguished place as one of the most powerful, and the only such memoir written from Canada. It is the inspiring story of a woman refusing to “drift with the stream” and fighting her way through an impossible, unjust system. This compelling, heart-wrenching story has been published in Germany, Japan, the US, UK and Australia, where it went straight to #1 on the bestseller list and has been reprinted several times; Dutch, French and Turkish editions will appear in 2001.
TING-XING YE, born in Shanghai in 1952, was an English interpreter for the Chinese government before leaving China in 1987. Her memoir, A Leaf in the Bitter Wind, has been published in nine countries. She is also the author of six children’s books, ranging from picture books to YA, including the award-winning White Lily. She lives in Orillia, Ontario.
"An engrossing saga of one woman's turbulent life in Cultural Revolution China. I couldn't put it down." —Jan Wong, author of Red China Blues

“…a moving account of struggle and fortitude…”—The Globe and Mail

“…lurks in my memory, demanding to be re-read and shared…”—The Globe and Mail Reader’s Choice

“Ting-Xing Ye tells her story with such vividness of imagery and such a galloping momentum that the narrative reads like splendid fiction.”—Patrick Kavanagh in the Ottawa Citizen

“This account of a woman’s quest to gain ownership of her own life in the face of incredible adversity and devastating, compounding circumstance does not let go easily… It feels like an immersion, one from which you cannot instantly dry off after the last page.”—Horizons

“Ye writes vividly, with a deal of wry humour and an eye for the absurd… Despite the dark years of deprivation, separation and exile this book records, family relationships are at its heart… Guilt and resentment simmer as Ye and her siblings flail about in the political quicksands seeking, like all those about them, a path to social acceptance.”—The Australian

“It’s a page-turner that can be enjoyed as exquisite grassroots history, or as the simple story of one woman’s triumph over brutish odds.”—Cityview, USA

“Clearly, the writing was a very personal, painful process for Ting-Xing Ye, calling up the treasured memories of her devoted parents and their untimely deaths. We experience, along with her, a range of emotions… We learn to appreciate the true value of friendship, the precious love of family, and the strength and resilience of the human spirit.”—East York Reading Association

“Ye is not afraid to present herself in a bad light at times. It is all part of her reconciliation with the past… This profound document of oppression and courage is an essential read for anyone who cares at all about freedom.”—Cancontent