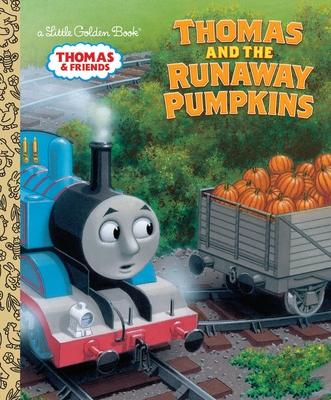 In this all-new Thomas & Friends(TM) Little Golden Book, the fall pumpkin crop on the Island of Sodor goes missing! Train-loving boys and girls ages 4 to 7 will wonder: How will the Pumpkin Festival go on without them? With nothing to judge, what will happen to the pumpkin-carving contest? But never fear--Thomas the Tank Engine is here to help his friends Percy, Edward, Emily, and Henry get the festivities back on track! It's the perfect way to celebrate the fall season and Halloween!
In the early 1940s, a loving father crafted a small blue wooden train engine for his son, Christopher. The stories that this father, the Reverend W Awdry, made up to accompany the wonderful toy were first published in 1945 and became the basis for the Railway Series, a collection of books about Thomas the Tank Engine and his friends--and the rest is history. Thomas & Friends now make up a big extended family of engines and others on the Island of Sodor. They appear not only in books but also in television shows and movies and as a wide variety of beautifully made toys. The adventures of Thomas and his friends, which are always, ultimately, about friendship, have delighted generations of train-loving boys and girls for more than 70 years and will continue to do so for generations to come.
Naomi Kleinberg is a children’s book editor and the author of many children’s books. She lives in New York City in an apartment so filled with books that there’s barely enough room for her family. By odd coincidence, her favorite foods—apples, avocados, and arugula—all begin with the letter A.