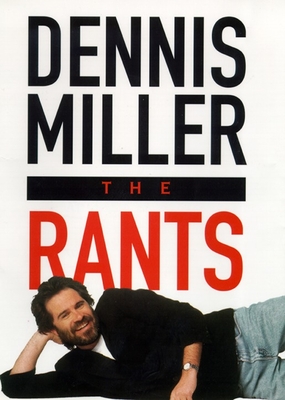 
Available in Warehouse. Wait for Email Confirmation for ETA
Now, I don't want to get off on a rant here

The New York Times called Dennis Miller's The Rants "a pleasing mix of profanity and wit...that will make fans of his irreverent liberal angst laugh out loud." Readers across the nation clearly agreed, because the book stayed on the Times hardcover bestseller list for months, with more than 130,000 copies in print. Now, an even broader audience can discover Miller's stinging wit in paperback.

Dennis Miller respects no boundaries. Whether the subject is dope-addled baseball players who can no longer swing their bats, do-nothing politicians who devote their careers to creating meaningful sound bites, or the nation's resigned acceptance of violence as a way of American life, these thematically arranged monologues are funny and angry. More significantly, they shatter the conventions of comedy by simultaneously making us laugh, think, and seethe.

When Miller takes the stage, the audience demands, "the rants, the rants, the rants." Here is the collection of his invigorating and thought-provoking monologues that showcase his singular point of view.
Dennis Miller is a regular on the comedy circuit and was the host of the Emmy Award–winning talk show Dennis Miller Live. He's also known for his stand-up specials, Saturday Night Live, and numerous movie appearances. Miller is the author of several books, including The Rants and I Rant, Therefore I Am. He and his wife live in Southern California.