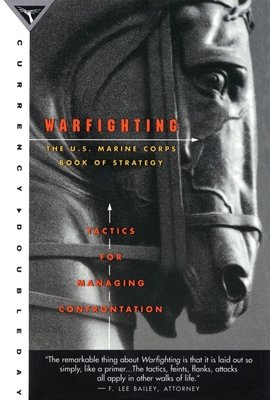 
Backordered - ETA Unknown
Warfighting is an authentic  American philosophy of action that will thrill the  millions of fans of SunTzu's The Art of  War and Musashi's T he Book of  Five Rings. This modern classic of  strategy and philosophy is the quintessential guide to  prevailing in competitive situations, be it war,  work, play, or daily  living.

Sometimes life is war and sometimes business  is war and sometimes you need to call in the  Marines. Over the past two hundred years, the Marines  have developed a reputation for getting the job  done-fearlessly, boldly, and taking no prisoners.  What better role model for the hidden warriors in  ourselves? What better advice to call on when the  stakes are high and sensitivity just isn't going  to work? Written in 1989 as a philosophical and  strategic guide-book for the US. Marine Corps,  Warfighting is a worthy successor  to SunTzu's The Art Of War.  With clarity, brevity, and wisdom, it describes the  basic forces at work in every competitive situation  whether on the field of battle, in the boardroom,  or in the courtroom. With twentieth-century  technology and its emphasis on speed and versatility,  the rules of war and competition have changed.  Warfighting's exploration of  maneuver warfare takes readers beyond Sun Tzu's classic  lessons and provides them a more thorough  understanding of what it takes to fight and win in the  modern world. Currency's edition of  Warfighting features interviews with famous  former Marines including F. Lee Bailey, Ed McMahon,  and Donald Regan. They tell how they have used the  Marine Corps' battle strategies of strength and  straightforwardness as their secret weapons in every  confrontation, whether at a corporate,  departmental. or personal level.
In 1989 US Marine Corps Commandant General A. M. Gray distributed a remarkable 77-page document to every officer in the Corps. Authentically written and brilliantly articulate, Warfighting, the official doctrine of the US Marine Corps, calls to mind other classics of strategy such as Sun Tzu’s The Art of War, Carl von Clausewitz’s On War, and Miyamoto Musashi’s The Book of Five Rings. In 1991, he retired from the Corps after 41 years of service.
"Warfighting... is like a primer... the feints, flanks, attacks all apply in other walks of life."--F. Lee Bailey, attorney.