Roger Ebert's Book of Film: From Tolstoy to Tarantino, the Finest Writing From a Century of Film (Hardcover) 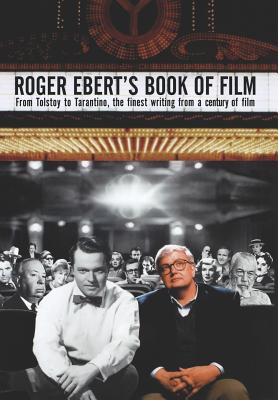 Roger Ebert's Book of Film: From Tolstoy to Tarantino, the Finest Writing From a Century of Film (Hardcover)

Thumbs up for the most lavish and entertaining anthology of writing on film ever, assembled by America's best known and most trusted movie critic. If going to the movies has been the twentieth century's most popular source of artistic pleasure, reading about the movies may not be far behind.

For this delicious, instructive, and vastly enjoyable anthology, Roger Ebert has selected and introduced an international treasury of more than 100 selections that touch on every aspect of filmmaking and filmgoing. Here are the stars (Truman Capote on Marilyn Monroe, Joan Didion on John Wayne, Tom Wolfe on Cary Grant, Lauren Bacall on herself), the directors (John Houseman on Orson Welles, Kenneth Tynan on Mel Brooks, John Huston on himself), the makers and shakers (producer Julia Phillips, mogul Daryll F. Zanuck, stuntman Joe Bonomo), and the critics and theorists (Pauline Kael, Graham Greene, Andrew Sarris, Susan Sontag). Here as well are the novelists who have indelibly captured the experience of moviegoing in our lives (Walker Percy, James Agee, Larry McMurtry) and the culture of the movie business (F. Scott Fitzgerald, Budd Schulberg, Nathanael West). Here is a book to get lost in and return to time and time againat once a history, an anatomy, and a loving appreciation of the central art form of our time.