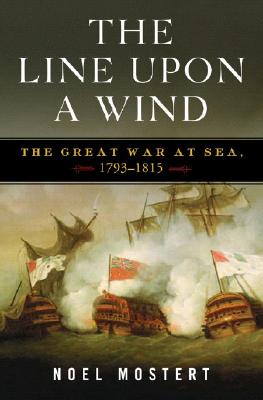 In February 1793 France declared war on Britain, and for the next twenty-two years the Revolutionary and Napoleonic Wars raged. This was to be the longest, cruelest war ever fought at sea, comparable in scale only to the Second World War. New naval tactics were brought to bear, along with such unheard-of weapons as rockets, torpedoes, and submarines. The war on land saw the rise of the greatest soldier the world had ever known—Napoleon Bonaparte—whose vast ambition was thwarted by a genius he never met in person or in battle: Admiral Horatio Nelson.

Noel Mostert's narrative ranges from the Mediterranean to the West Indies, Egypt to Scandinavia, showing how land versus sea was the key to the outcome of these wars. He provides details of ship construction, tactics, and life on board. Above all he shows us the extraordinary characters that were the raw material of Patrick O'Brian's and C. S. Forester's magnificent novels.

Noel Mostert was the Montreal Star correspondent in New York and Europe during the 1950s and has since reported for different American magazines from Europe, Africa, and the Middle East. He lives in Tangiers.
Ambitious, sweeping, and painstakingly delineated.
— Kirkus Reviews

This spirited work contributes significantly to a developing interpretation of the years 1794–1815 as an era of worldwide, total war.
— Publishers Weekly