Intuition Pumps And Other Tools for Thinking (Hardcover) 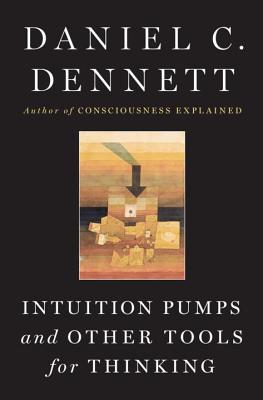 Intuition Pumps And Other Tools for Thinking (Hardcover)

One of the world’s leading philosophers offers aspiring thinkers his personal trove of mind-stretching thought experiments.

Over a storied career, Daniel C. Dennett has engaged questions about science and the workings of the mind. His answers have combined rigorous argument with strong empirical grounding. And a lot of fun.


Intuition Pumps and Other Tools for Thinking offers seventy-seven of Dennett’s most successful "imagination-extenders and focus-holders" meant to guide you through some of life’s most treacherous subject matter: evolution, meaning, mind, and free will. With patience and wit, Dennett deftly deploys his thinking tools to gain traction on these thorny issues while offering readers insight into how and why each tool was built.

Alongside well-known favorites like Occam’s Razor and reductio ad absurdum lie thrilling descriptions of Dennett’s own creations: Trapped in the Robot Control Room, Beware of the Prime Mammal, and The Wandering Two-Bitser. Ranging across disciplines as diverse as psychology, biology, computer science, and physics, Dennett’s tools embrace in equal measure light-heartedness and accessibility as they welcome uninitiated and seasoned readers alike. As always, his goal remains to teach you how to "think reliably and even gracefully about really hard questions."

Daniel C. Dennett is University Professor and Austin B. Fletcher Professor of Philosophy at Tufts University and the author of numerous books including Intuition Pumps and Other Tools for Thinking, Breaking the Spell, Darwin’s Dangerous Idea, and Consciousness Explained.
Our best current philosopher. He is the next Bertrand Russell. Unlike traditional philosophers, Dan is a student of neuroscience, linguistics, artificial intelligence, computer science, and psychology. He’s redefining and reforming the role of the philosopher.
— Marvin Minsky

One of the most original thinkers of our time.
— Michael Shermer - Science

Once in a blue moon an analytic philosopher comes along who redeems his subdiscipline by combining professional persnicketiness with a romantic spirit, a vivid imagination, and a sense of humor…One of our most original and most readable philosophers.
— Richard Rorty

Cloaked in the breezy, familiar trappings of a self-help book, Intuition Pumps is in actuality a dark mirror of that genre—a field of rabbit holes designed to leave the reader with more questions than answers, and wiser for the long and indirect journey.