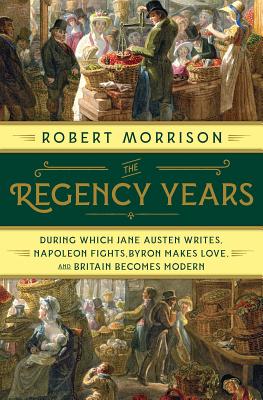 A surprising and lively history of an overlooked era that brought the modern world of art, culture, and science decisively into view.

The Victorians are often credited with ushering in our current era, yet the seeds of change were planted in the years before. The Regency (1811–1820) began when the profligate Prince of Wales—the future king George IV—replaced his insane father, George III, as Britain’s ruler.

Around the regent surged a society steeped in contrasts: evangelicalism and hedonism, elegance and brutality, exuberance and despair. The arts flourished at this time with a showcase of extraordinary writers and painters such as Jane Austen, Lord Byron, the Shelleys, John Constable, and J. M. W. Turner. Science burgeoned during this decade, too, giving us the steam locomotive and the blueprint for the modern computer.

Yet the dark side of the era was visible in poverty, slavery, pornography, opium, and the gothic imaginings that birthed the novel Frankenstein. With the British military in foreign lands, fighting the Napoleonic Wars in Europe and the War of 1812 in the United States, the desire for empire and an expanding colonial enterprise gained unstoppable momentum. Exploring these crosscurrents, Robert Morrison illuminates the profound ways this period shaped and indelibly marked the modern world.

Robert Morrison is British Academy Global Professor at Bath Spa University in England, and a Fellow of the Royal Society of Canada. He has produced editions of works by Jane Austen and Thomas De Quincey. He lives in Bath, England.

Arguing that Britain truly started to become modern in the Regency era, this delightful book explains why it deserves to be better known.
— Economist, Books of the Year, 2019

Morrison showcases that relatively brief period—less than a decade—as an age of ‘remarkable diversity, upheaval, and elegance.'…Given such plenty, what more could one ask from a work of cultural history?
— Michael Dirda - Washington Post

The Prince Regent…ruled over a period of extraordinary creativity and it is that progressive cultural legacy that Mr. Morrison commends to contemporary Britain and the rest of the world.
— Ruth Scurr - Wall Street Journal

An enjoyable book full of anecdotes and scenarios of both the rich and famous, the poor and exploited alike.
— Julie Peakman - History Today

[A] zippy and vivid portrait of the Regency era.
— Henry Hitchings - The Sunday Times

The Regency Years should ignite new interest in an era replete with drama, innovation and, yes, the seeds of much that would catapult not only Britain, but the world, into modernity.
— Rosemary Michaud - Post and Courier

The Regency Years has all the high spirits, the verve, and the narrative pace that Morrison celebrates in its most characteristic cultural productions. It offers a bracing, informative, and always entertaining introduction to the period.
— Richard Cronin - Wordsworth Circle

The Regency Years reads like a romance novel of its period without the novel but makes an entertaining nonfiction read with superior prose and dialogue.

Delightful…Morrison’s lively and engaging study not only illuminates these many and rapid changes, but convincingly argues that ‘its many legacies are still all around us.’
— Publishers Weekly (starred review)