A Guide to the Missouri Constitution (Abridged / Paperback) 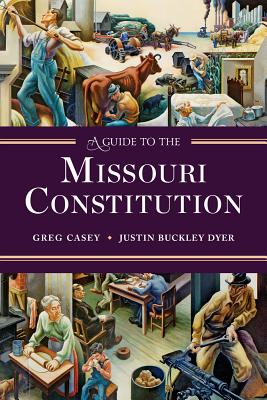 A Guide to the Missouri Constitution (Abridged / Paperback)

A Guide to the Missouri Constitution is the most efficient text for understanding the provisions and politics of the Missouri State Constitution. Concise apparatus, including clear tables and diagrams, highlights the structure of Missouri government and the relevance that the Constitution has to contentious issues in the state today.

Greg Casey is professor emeritus of political science at the University of Missouri, Columbia. Professor Casey spent forty-five years teaching courses in American government, political behavior, law and the political process, public policy, judicial process and behavior, state government, and the U.S. Constitution. He earned his Ph. D. from Georgetown University in 1968. He has won many teaching awards for his classes on the U.S. Constitution, the judiciary, and American and state government. Professor Casey is the author of numerous articles as well as two chapters in Missouri Government and Politics, Second Edition (ed. Hardy, Dohm, and Leuthold, 1995).

Justin Dyer is associate professor of political science and director of the Kinder Institute on Constitutional Democracy at the University of Missouri, Columbia. After attending the University of Oklahoma on a wrestling scholarship, he completed his M.A. and Ph.D. in Government at the University of Texas at Austin. His research and teaching interests span the fields of American political development, political philosophy, and constitutional law, with a particular interest in the perennial philosophy of natural law. Professor Dyer is the editor of American Soul: The Contested Legacy of the Declaration of Independence (2012) and author of Natural Law and the Antislavery Constitutional Tradition (2012) and Slavery, Abortion, and the Politics of Constitutional Meaning (2013). He regularly teaches undergraduate courses on political theory and the U.S. Constitution and graduate seminars on public law.