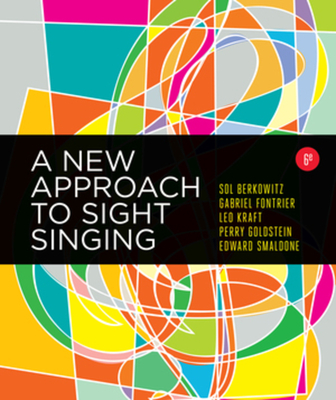 A classic sight-singing anthology featuring an ideal blend of newly composed melodies and music from the literature.

A New Approach to Sight Singing combines author-composed exercises with carefully selected excerpts from the literature, all arranged for an ideal pedagogical progression.

Perry Goldstein is professor of music at Stony Brook University, where he is currently chairman of the Department of Music. He is responsible for all aspects of the undergraduate and graduate musicianship programs and also teaches music composition, theory, and analysis. His teaching has been recognized by Stony Brook University's President's Award for Excellence in Teaching and by the State University of New York's Chancellor's Award for Excellence in Teaching. He is the author of Rudiments of Music: A Concise Guide to Music Theory and has written about music for the Library of Congress as well as the New York Times and many other publications. He is an active composer, with nineteen recordings to his credit and performances worldwide.

Edward Smaldone is professor of music at the Aaron Copland School of Music at Queens College and was director of the School of Music from 2002 to 2016. An active composer, he is the recipient of the Goddard Lieberson Fellowship from the American Academy of Arts and Letters, as well as grants and awards from ASCAP, the MacDowell Colony, Yaddo, the Charles Ives Center for the Arts, and the American Music Center. Smaldone's music has been performed by the Munich Radio Orchestra, the Denver Chamber Orchestra, the Memphis Symphony, the EOS Repertoire Orchestra (Beijing), and many other ensembles throughout the United States, Canada, Asia and Europe and is recorded on the Naxos, CRI, New World Records, Ablaze, and Capstone labels. Smaldone has more than thirty years of college teaching experience in the areas of music theory and musicianship.