Crystal Fire: The Invention of the Transistor and the Birth of the Information Age (Paperback) 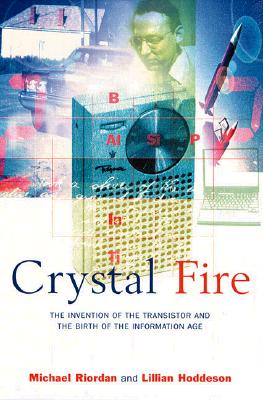 Crystal Fire: The Invention of the Transistor and the Birth of the Information Age (Paperback)

"Without the invention of the transistor, I'm quite sure that the PC would not exist as we know it today."—Bill Gates

On December 16, 1947, John Bardeen and Walter Brattain, physicists at Bell Laboratories, jabbed two electrodes into a sliver of germanium. The power flowing from the germanium far exceeded what went in; in that moment the transistor was invented and the Information Age was born. No other devices have been as crucial to modern life as the transistor and the microchip it spawned, but the story of the science and personalities that made these inventions possible has not been fully told until now. Crystal Fire fills this gap and carries the story forward. William Shockley, Bell Labs' team leader and co-recipient of the Nobel Prize with Brattain and Bardeen for the discovery, grew obsessed with the transistor and went on to become the father of Silicon Valley. Here is a deeply human story about the process of invention — including the competition and economic aspirations involved — all part of the greatest technological explosion in history. The intriguing history of the transistor — its inventors, physics, and stunning impact on society and the economy — unfolds here in a richly told tale."—Science News "Thoroughly accessible to lay readers as well as the techno-savvy. . . . [A] fine book."—Publishers Weekly

Lillian Hoddeson is an historian at the University of Illinois and lives in Urbana. Research for Crystal Fire was sponsored by the Sloan Foundation.