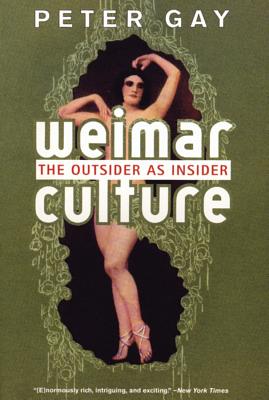 A seminal work as melodious and haunting as the era it chronicles.

First published in 1968, Weimar Culture is one of the masterworks of Peter Gay's distinguished career. A study of German culture between the two wars, the book brilliantly traces the rise of the artistic, literary, and musical culture that bloomed ever so briefly in the 1920s amid the chaos of Germany's tenuous post-World War I democracy, and crashed violently in the wake of Hitler's rise to power. Despite the ephemeral nature of the Weimar democracy, the influence of its culture was profound and far-reaching, ushering in a modern sensibility in the arts that dominated Western culture for most of the twentieth century. Vivid and eminently readable, Weimar Culture is the finest introduction for the casual reader and historian alike.

Peter Gay (1923—2015) was the author of more than twenty-five books, including the National Book Award winner The Enlightenment, the best-selling Weimar Culture, and the widely translated Freud: A Life for Our Time.
Absorbing…[Peter Gay] has recaptured the spirit of this exciting decade and he provides a reliable guide to it.
— Walter Laqueur - New York Times Book Review

A virtuoso performance, not the least because it has captured, with the greatest possible economy, a culture whose origin and essence were closely intertwined with its politics.
— Peter Jacobsohn - The New Republic