Midnight in Siberia: A Train Journey into the Heart of Russia (Paperback) 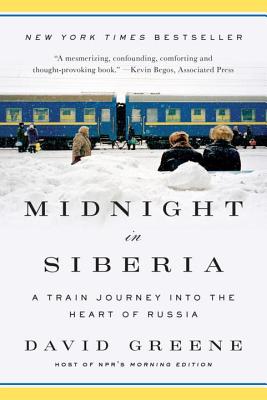 Midnight in Siberia: A Train Journey into the Heart of Russia (Paperback)

Travels with NPR host David Greene along the Trans-Siberian Railroad capture an overlooked, idiosyncratic Russia in the age of Putin.

Far away from the trendy cafés, designer boutiques, and political protests and crackdowns in Moscow, the real Russia exists.

Midnight in Siberia chronicles David Greene’s journey on the Trans-Siberian Railway, a 6,000-mile cross-country trip from Moscow to the Pacific port of Vladivostok. In quadruple-bunked cabins and stopover towns sprinkled across the country’s snowy landscape, Greene speaks with ordinary Russians about how their lives have changed in the post-Soviet years.

These travels offer a glimpse of the new Russia—a nation that boasts open elections and newfound prosperity but continues to endure oppression, corruption, a dwindling population, and stark inequality.

We follow Greene as he finds opportunity and hardship embodied in his fellow train travelers and in conversations with residents of towns throughout Siberia.

We meet Nadezhda, an entrepreneur who runs a small hotel in Ishim, fighting through corrupt layers of bureaucracy every day. Greene spends a joyous evening with a group of babushkas who made international headlines as runners-up at the Eurovision singing competition. They sing Beatles covers, alongside their traditional songs, finding that music and companionship can heal wounds from the past. In Novosibirsk, Greene has tea with Alexei, who runs the carpet company his mother began after the Soviet collapse and has mixed feelings about a government in which his family has done quite well. And in Chelyabinsk, a hunt for space debris after a meteorite landing leads Greene to a young man orphaned as a teenager, forced into military service, and now figuring out if any of his dreams are possible.

Midnight in Siberia is a lively travel narrative filled with humor, adventure, and insight. It opens a window onto that country’s complicated relationship with democracy and offers a rare look into the soul of twenty-first-century Russia.

David Greene is cohost of NPR’s Morning Edition. He is NPR’s former Moscow bureau chief and has spent more than a decade covering politics and events from the White House and abroad. He lives in Washington, DC, with his wife, Rose, a restaurant owner and fellow traveler.
A mesmerizing, confounding, comforting and thought-provoking book.
— Kevin Begos - Associated Press

Describe[s] the Russia of the vast interior…. An impressionistic book, a book about people along the way.
— Bruce Ramsey - Seattle Times

In this picaresque story of adventure, David Greene reaches beyond Putin’s Kremlin across Siberia to show us Russian life in the Raw—the gritty stoicism, surprising warmth and generosity, black humor, and resilience of the narod, the average people. A storyteller with a human touch, Greene finds Russians tested by tragedy and war as he joins them in their cramped apartments, jammed trains, and gulping beer and pickled horse sausage in their steam baths, facing an uncertain future with an unexpected streak of inner wildness. His Russians are stolidly patriotic and, even now, drawn mostly to strong leaders, resigned to tough justice and preferring stability and harsh rule to the chaotic uncertainties of democracy, their personal lives ‘full of poetry, pain, and laughter.’
— Hedrick Smith, author of The Russians and Who Stole the American Dream

Greene is a great storyteller, and what a story he has to tell. A fascinating and thought-provoking journey deep into Russia’s physical vastness and soul. Greene’s landscape is inhabited by a cast of characters that light up both and would have made Anton Chekhov proud. A first-rate tale that puts you aboard the Trans-Siberian Railroad on the journey of a lifetime.
— Aaron David Miller, distinguished scholar, Wilson Center, and author of The End of Greatness: Why America Can’t Have (and Doesn’t Want) Another Great President

Beautifully written… The sharply observed vignettes, combined with the moving, elegiac quality of the prose make it a hard book to put down. David Greene’s travels provide insights and context for some of the more dramatic recent events in Russia that will appeal to both the casual traveler and the seasoned observer.
— Fiona Hill, coauthor of Mr. Putin: Operative in the Kremlin and director of the Center on the United States and Europe at the Brookings Institution