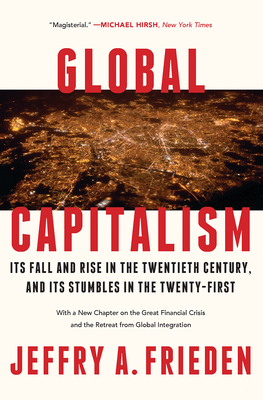 By Jeffry A. Frieden

"One of the most comprehensive histories of modern capitalism yet written." —Michael Hirsh, New York Times

An authoritative, insightful, and highly readable history of the twentieth-century global economy, updated with a new chapter on the early decades of the new century. Global Capitalism guides the reader from the globalization of the early twentieth century and its swift collapse in the crises of 1914–45, to the return to global integration at the end of the century, and the subsequent retreat in the wake of the financial crisis of 2008.

Jeffry A. Frieden is the Stanfield Professor of International Peace at Harvard University. A specialist on the politics of international financial relations, he is also coauthor, with Menzie Chinn, of Lost Decades, a history of the 2008 financial crisis.
[Jeffry A.] Frieden has a wonderful way of weaving together politics and economics, micro and macro, past and present in an accessible narrative that is as even-handed and objective on the subject as you’ll find.
— Washington Post

Essential reading for anyone who wants to understand the history of globalization from 1870 to the present.
— John Bruton - Irish Independent