Will My Cat Eat My Eyeballs?: And Other Questions About Dead Bodies (Paperback) 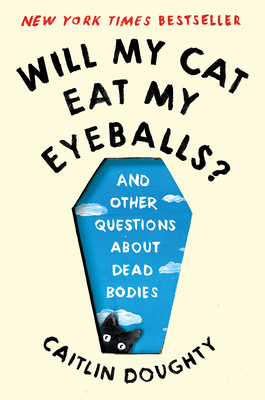 Will My Cat Eat My Eyeballs?: And Other Questions About Dead Bodies (Paperback)

Winner of a Goodreads Choice Award

Everyone has questions about death. In Will My Cat Eat My Eyeballs?, best-selling author and mortician Caitlin Doughty answers the most intriguing questions she’s ever received about what happens to our bodies when we die. In a brisk, informative, and morbidly funny style, Doughty explores everything from ancient Egyptian death rituals and the science of skeletons to flesh-eating insects and the proper depth at which to bury your pet if you want Fluffy to become a mummy. Now featuring an interview with a clinical expert on discussing these issues with young people—the source of some of our most revealing questions about death—Will My Cat Eat My Eyeballs? confronts our common fear of dying with candid, honest, and hilarious facts about what awaits the body we leave behind.

Caitlin Doughty is a mortician and the New York Times best-selling author of Smoke Gets in Your Eyes, From Here to Eternity, and Will My Cat Eat My Eyeballs? She is the creator of the web series Ask a Mortician, and the founder of The Order of the Good Death. She lives in Los Angeles, California, where she owns a funeral home.
A charming guide into something we take enormous pains to avoid.
— B. David Zarley - Paste

There’s serious science here, but also cultural lessons in death and dying, a little history, and a touch of gruesomeness wrapped in that shroud of sharp, witty humor.
— Terri Schlichenmeyer - Philadelphia Tribune

My daughter hasn’t put it down. She reads it out loud to me while we giggle.
— Kari Byron, author of Crash Test Girl and former host of Mythbusters

A delightful mixture of science and humor.… Entertaining.
— Library Journal

Doughty’s answers are as… distinctive as the questions. She blends humor with respect for the dead.… Her investigations of ritual, custom, law and science are thorough, and she doesn’t shy from naming the parts of Grandma’s body that might leak after she is gone.
— Julia Kastner - Shelf Awareness