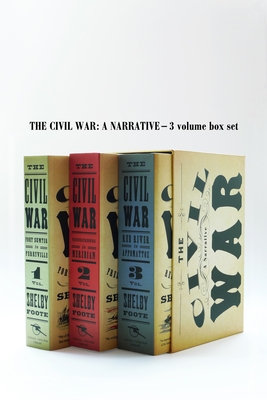 
Available in Warehouse. Wait for Email Confirmation for ETA
Foote's comprehensive history of the Civil War includes three compelling volumes: Fort Sumter to Perryville, Fredericksburg to Meridian, and Red River to Appomattox. Collected together in a handsome boxed set, this is the perfect gift for any Civil War buff.

Fort Sumter to Perryville
The first volume opens with Jefferson Davis's farewell to the United States Senate and ends on the bloody battlefields of Antietam and Perryville, as the full, horrible scope of America's great war becomes clear.

Fredericksburg to Meridian
Focused on the pivotal year of 1863, the second volume of Shelby Foote’s masterful narrative history brings to life the Battle of Gettysburg and Grant’s Vicksburg campaign and covers some of the most dramatic and important moments in the Civil War.

Red River to Appomattox
This final volume brings to life the military endgame, the surrender at Appomattox, and the tragic dénouement of the war—the assassination of President Lincoln.
Shelby Foote was an American historian and novelist.  He was born on November 7, 1916 in Greenville, Mississippi, and attended school there until he entered the University of North Carolina. During World War II he served as a captain of field artillery but never saw combat. After World War II he worked briefly for the Associated Press in their New York bureau. In 1953 he moved to Memphis, where he lived for the remainder of his life.

Foote was the author of six novels: Tournament, Follow Me Down, Love in a Dry Season, Shiloh, Jordan County, and September, September. He is best remembered for his 3-volume history The Civil War: A Narrative, which took twenty years to complete and resulted in his being a featured expert in Ken Burns' acclaimed PBS documentary, "The Civil War". Over the course of his writing career, Foote was also awarded three Guggenheim fellowships.