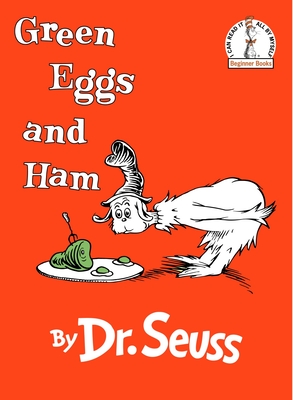 This Dr. Seuss classic will have readers of all ages craving Green Eggs and Ham—no matter where they are!

With unmistakable characters and signature rhymes, Dr. Seuss’s beloved favorite has cemented its place as a children’s classic. Kids will love the terrific tongue-twisters as the list of places to enjoy green eggs and ham gets longer and longer...and they might even  learn a thing or two about trying new things!

Originally created by Dr. Seuss himself, Beginner Books are fun, funny, and easy to read. These unjacketed hardcover early readers encourage children to read all on their own, using simple words and illustrations. Smaller than the classic large format Seuss picture books like The Lorax and Oh, The Places You’ll Go!, these portable packages are perfect for practicing readers ages 3-7, and lucky parents too!

THEODOR SEUSS GEISEL—aka Dr. Seuss—is one of the most beloved children’s book authors of all time. From The Cat in the Hat to Oh, the Places You’ll Go!, his iconic characters, stories, and art style have been a lasting influence on generations of children and adults. The books he wrote and illustrated under the name Dr. Seuss (and others that he wrote but did not illustrate, including some under the pseudonyms Theo. LeSieg and Rosetta Stone) have been translated into thirty languages. Hundreds of millions of copies have found their way into homes and hearts around the world. Dr. Seuss’s long list of awards includes Caldecott Honors for McElligot’s Pool, If I Ran the Zoo, and Bartholomew and the Oobleck, the Pulitzer Prize, and eight honorary doctorates. Works based on his original stories have won three Oscars, three Emmys, three Grammys, and a Peabody.
"The good doctor has scored another triumph."--The New York Times