City: A Story of Roman Planning and Construction (Paperback) 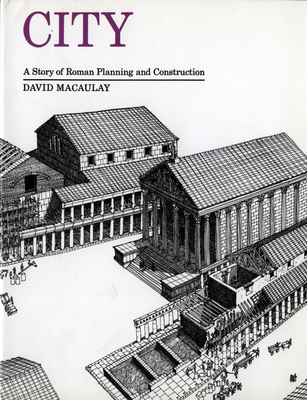 City: A Story of Roman Planning and Construction (Paperback)

By David Macaulay
List Price: $12.99
Our Price: $10.99
(Save: $2.00 15%)
On Our Shelves as of 9am Today
Award-winning author-illustrator David Macaulay brings readers into a beautiful exploration of Roman buildings and construction.

With black and white illustrations and detailed explanations, this comprehensive and visual resource is perfect for young readers interested in history, architecture, and Roman civilization.

David Macaulay is an award-winning author and illustrator whose books have sold millions of copies in the United States alone, and his work has been translated into a dozen languages. Macaulay has garnered numerous awards including the Caldecott Medal and Honor Awards, the Boston Globe–Horn Book Award, the Christopher Award, an American Institute of Architects Medal, and the Washington Post–Children’s Book Guild Nonfiction Award. In 2006, he was the recipient of a MacArthur Fellowship, given “to encourage people of outstanding talent to pursue their own creative, intellectual, and professional inclinations.” Superb design, magnificent illustrations, and clearly presented information distinguish all of his books. David Macaulay lives with his family in Vermont.

"City charts the planning and building of an imaginary Roman city, 'Verbonia.' Macaulay focuses on the achievement of efficient and rational city planning. His brilliantly individualistic drawings capture the essential quality of the Roman character, the ability to organize." School Library Journal, Starred —