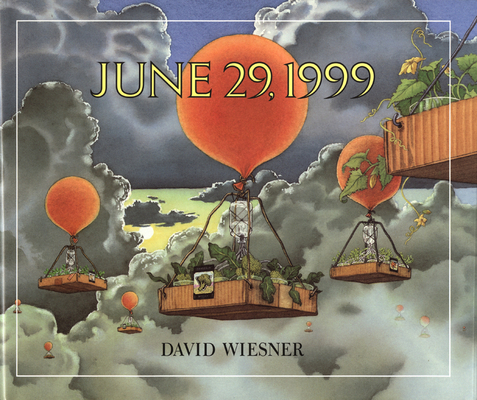 The lively imagination of Caldecott medalist David Wiesner forecasts astounding goings-on for a Tuesday in the not too distant future--an occurrence of gigantic vegetal proportions.

In this whimsical picture book from a master of the form, broccoli falls from the sky, bracing itself in the backyard; turnips hit the trail in the Rocky Mountains; and lima beans land in Levittown...

"Caldecott medalist Wiesner once again presents an offbeat premise and unconventional artwork to tempt youngsters into his deliciously skewed landscapes. Spectacular to look at, great fun to read--it is, in sum, executed with consummate skill." (Publishers Weekly starred review)

"Fans of Wiesner's offbeat art will be delighted." (The Horn Book starred review)

David Wiesner is internationally renowned for his visual storytelling and has won the Caldecott Medal three times—for Tuesday, The Three Pigs, and Flotsam—the second person in history to do so. He is also the recipient of three Caldecott Honors, for Free Fall, Sector 7, and Mr. Wuffles. He lives near Philadelphia with his family. david-wiesner.harpercollins.com