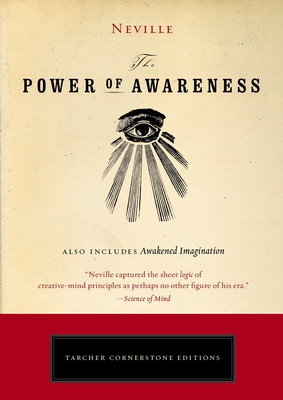 A beautiful edition of one of the twentieth century’s most powerful and intriguing works on how to use the manifesting powers of your mind. Features the bonus book, Awakened Imagination.

Here is a signature volume of one of the most quietly impactful and radical works ever written on the creative potentialities of human thought, The Power of Awareness. In this book, author Neville presents a concise, unforgettable statement of his core philosophy: that the world around you is a picture in your mind’s eye, created by your thinking, and susceptible to change by altering your thoughts and feelings.

Originally published in 1952, The Power of Awareness not only prefigured the revolution in mind-power metaphysics, but surpassed it. Before the public had heard about quantum physics experiments (popularized in our own time through movies such as The Secret and What the Bleep Do We Know!?), Neville was conveying the unheard-of message that reality is directly impacted by the perspective and consciousness of the observer himself. Moreover, he wrote, each of us is ultimately responsible for, and capable of reshaping, the outer circumstances we perceive.

Neville’s authorial genius is his ability to deliver these ideas in an immensely readable and enjoyable way. Like few other metaphysical figures of his era, Neville captured complexities in simple stories, memorable examples, and practical advice. His books are unfailingly brief and easy to read, because his command of his material is so masterly and complete.

The Power of Awareness also includes a special bonus work, Awakened Imagination, originally published in 1954. This two-in-one volume forms a brilliant introduction and user’s guide to the practical philosophy of a great spiritual thinker.

Born to an English family in Barbados, NEVILLE GODDARD (1905–1972) moved to New York City at age seventeen to study theater. In 1932, he abandoned his work as a dancer and actor to fully devote himself to his career as a metaphysical writer and lecturer. Using the solitary pen name Neville, he became one of the twentieth century’s most articulate and charismatic purveyors of the philosophy generally called New Thought. Neville was an influence on a wide range of spiritual thinkers and writers, from Joseph Murphy to Carlos Castaneda. The impact of his ideas continues to be felt in some of today’s bestselling works of practical spirituality.

"Neville may eventually be recognized as one of the world's great mystics." –Joseph Murphy, author of The Power of Your Subconscious Mind

"A popular speaker on metaphysical themes from the late '30s until his death in 1972, Neville authored ten books in which he captured the sheer logic of creative mind principles. His work has impacted me in a very profound way; in fact, he's been a great mentor to me in the past few years." –Dr. Wayne Dyer in Wishes Fulfilled

“Neville may be the positive-thinking movement’s most radical and subtly influential voice.”  –Mitch Horowitz, Time.com
“Of all the metaphysical systems with which I am acquainted, Neville’s is the most magical.” –Israel Regardie

"The words of spiritual teacher Neville Goddard retain their power to electrify... Neville captured the sheer logic of creative mind principles as perhaps no other figure of his era." –Science of Mind magazine