Guerrilla Tacos: Recipes from the Streets of L.A. [A Cookbook] (Hardcover) 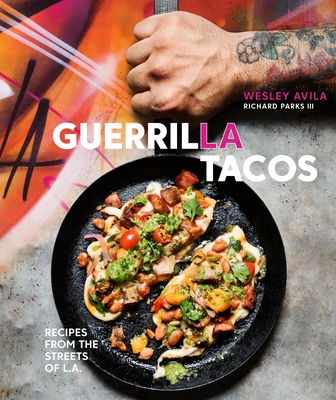 Guerrilla Tacos: Recipes from the Streets of L.A. [A Cookbook] (Hardcover)


Available in Warehouse. Wait for Email Confirmation for ETA
The definitive word on tacos from native Angeleno Wes Avila, who draws on his Mexican heritage as well as his time in the kitchens of some of the world's best restaurants to create taco perfection.

In a town overrun with taco trucks, Wes Avila's Guerrilla Tacos has managed to win almost every accolade there is, from being crowned Best Taco Truck by LA Weekly to being called one of the best things to eat in Los Angeles by legendary food critic Jonathan Gold. Avila's approach stands out in a crowded field because it's unique: the 50 base recipes in this book are grounded in authenticity but never tied down to tradition. Wes uses ingredients like kurobata sausage and sea urchin, but his bestselling taco is made from the humble sweet potato. From basic building blocks to how to balance flavor and texture, with comic-inspired illustrations and stories throughout, Guerrilla Tacos is the final word on tacos from the streets of L.A.
Before WES AVILA began his life as a taquero, he was a forklift driver at a box factory for seven years. In 2003, he quit his job to go to culinary school full-time. After attending California School of Culinary Arts in Pasadena, California, he went to work at L'Auberge Carmel with Walter Mansk, followed by Palate Food + Wine, Marche, and Le Comptoir with Gary Menes. In August of 2012, Wes left the world of fine dining to devote himself to running Guerrilla Tacos—at that time, a two-person street cart.

RICHARD PARKS is a writer and filmmaker living in Los Angeles. He has written for Lucky Peach, the New York Times, and McSweeneys.
“The reason I love Guerrilla Tacos so much is because it has that authentic, Mexican, East L.A. taco vibe. But it also just screams innovation. The flavors and imagination that Wes has put into the tacos is what really makes it stand out. It has that thing that feels like a taco but it’s so much more than a taco.”
—Skrillex

“Don’t presume Wesley Avila’s terrific Guerrilla Tacos is a book just about tacos. You’d be mistaken, because this is story, a wonderfully told narrative about a man, his struggles, and his dream. Thankfully for him—and for us—it’s a story with a happy ending and a slew of delicious recipes.”
—Nancy Silverton, co-owner of Mozza Restaurant Group

"There are cookbooks you can't wait to actually cook out of, cookbooks you display on your coffee table to remind yourself how cool you are, and cookbooks you read every sentence of because they've somehow nailed storytelling and recipe writing. Well, that last one is a rare unicorn. The new Guerrilla Tacos cookbook is one of those."
—Alex Beggs, BonAppetit.com

"Narrated in Avila’s relaxed, conversational style, that story pulls you in, as do the 50 recipes. [...] Avila also includes more than two dozen of his fantastic salsas, plus illustrations, comics and helpful advice (on tortillas, on tostadas)."
—Tien Nguyen, The Los Angeles Times

“[...] the brilliant mashup that is Guerrilla Tacos feels personal, not gimmicky. With offerings like pork belly and caviar tacos alongside adobo, pastor, carnitas and the gang, there’s a reason that Jonathan Gold deemed it L.A.’s Best Taco Truck. In Guerrilla Tacos: Recipes from the Streets of LA (Ten Speed), with writer Richard Parks III, Avila tells his underdog story with endearing charm.”
—Christine Muhlke, Bon Appetit

"Avila is leading a new wave of LA chefs — children of immigrants, classically trained in French cuisine — who blur the lines between high and low and, in his case, leaving upscale restaurants to serve street food."
—Mandalit Del Barco, National Public Radio