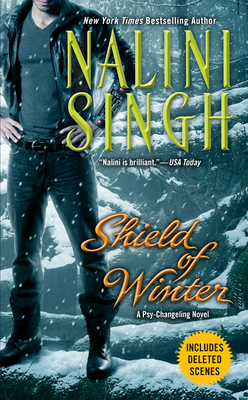 This is book number 13 in the Psy-Changeling Novel, A series.

Assassin. Soldier. Arrow. That is who Vasic is, who he will always be. His soul drenched in blood, his conscience heavy with the weight of all he’s done, he exists in the shadows, far from the hope his people can almost touch—if only they do not first drown in the murderous insanity of a lethal contagion. To stop the wave of death, Vasic must complete the simplest and most difficult mission of his life. For if the Psy race is to survive, the empaths must wake…

Having rebuilt her life after medical “treatment” that violated her mind and sought to suffocate her abilities, Ivy should have run from the black-clad Arrow with eyes of winter frost. But Ivy Jane has never done what she should. Now, she’ll fight for her people, and for this Arrow who stands as her living shield, yet believes he is beyond redemption. But as the world turns to screaming crimson, even Ivy’s fierce will may not be enough to save Vasic from the cold darkness…

INCLUDES DELETED SCENES
Nalini Singh is the New York Times bestselling author of the Psy/Changeling novels including Heart of Obsidian, Tangle of Need, and Kiss of Snow. She is passionate about writing. Though she’s traveled as far afield as the deserts of China, the Highlands of Scotland, and the temples of Japan, it is the journey of the imagination that fascinates her most. She’s beyond delighted to be able to follow her dream as a writer.

Nalini lives and works in beautiful New Zealand.
Praise for Nalini Singh and her Psy/Changeling series

“This series is so original and so different.”—Dark Faerie Tales

“I don’t think there is a single paranormal series as well-planned, well-written, and downright fantabulous as Ms. Singh’s Psy-Changeling series.”—All About Romance

“A standout series among the paranormal romance on the market today.”—Fresh Fiction