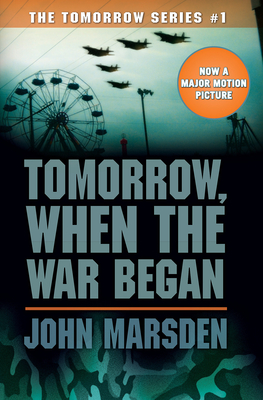 This is book number 1 in the Tomorrow series.

World War III becomes an unstoppable reality in the action-packed first installment of the Tomorrow series--an international bestseller in an eye-catching new paperback.When Ellie and her friends go camping, they have no idea they're leaving their old lives behind forever. Despite a less-than-tragic food shortage and a secret crush or two, everything goes as planned. But a week later, they return home to find their houses empty and their pets starving. Something has gone wrong--horribly wrong. Before long, they realize the country has been invaded, and the entire town has been captured--including their families and all their friends.Ellie and the other survivors face an impossible decision: They can flee for the mountains or surrender. Or they can fight.
John Marsden accidentally put himself through the perfect training to become a novelist. He read vast numbers of books, acquired a love of language, and became insatiably curious about other people. He also had a variety of jobs, 32 at the last count, including working in abattoirs, hospitals, morgues and a haunted house. In 1985, rather to his own surprise, he found himself teaching English in the Australian bush, at Timbertop School. Noticing a complete lack of interest in reading among his Year 9 students he tried his hand at writing a short novel that he thought they might enjoy. The rest is history. John Marsden, author of the Tomorrow series and Ellie Chronicles, is now the world's most successful author of teenage fiction. He has sold a million and a half books worldwide, and has won awards in Europe, America and Australia. His first love however is still teaching, and he spends most of his time running writing camps at his property, near Hanging Rock, Victoria.