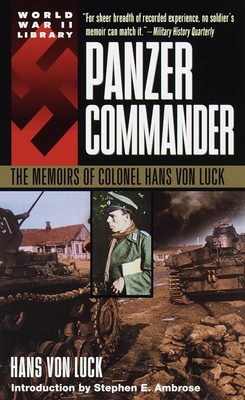 
Available in Warehouse. Wait for Email Confirmation for ETA
A stunning look at World War II from the other side...

From the turret of a German tank, Colonel Hans von Luck commanded Rommel's 7th and then 21st Panzer Division. El Alamein, Kasserine Pass, Poland, Belgium, Normandy on D-Day, the disastrous Russian front--von Luck fought there with some of the best soldiers in the world. German soldiers.

Awarded the German Cross in Gold and the Knight's Cross, von Luck writes as an officer and a gentleman. Told with the vivid detail of an impassioned eyewitness, his rare and moving memoir has become a classic in the literature of World War II, a first-person chronicle of the glory--and the inevitable tragedy--of a superb soldier fighting Hitler's war.
Hans von Luck was born in 1911 in Flensburg, Germany, the son of a naval officer. Although he would have preferred to study law, he followed the path of duty and in 1929 entered the Reichswehr as a cadet officer. In 1939 his motorized unit was one of the first to cross the frontier into Poland, marking the start of World War II. Thereafter he was constantly in action in every major theatre of war. He was wounded twice and received two of his country's highest awards for gallantry, the German Cross in Gold and the Knight's Cross. He ended the war a full colonel, one of the youngest in the German army. He is married, for the second time, and has three sons.
"For sheer breadth of recorded experience, no soldier's memoir can match it."
--Military History Quarterly

"A soldier, a warrior, and a leader who never failed his men, and whose courage never faltered."
--LibraryJournal

"The ultimate professional soldier...a personal history that may provide guideposts for the future."
--Topeka Capital-Journal