Knights of the Hill Country (Paperback) 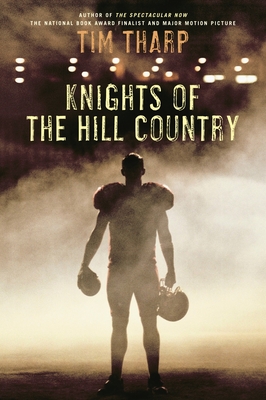 Knights of the Hill Country (Paperback)


This title is likely unavailable. Email or call for price and availability.
Welcome to Kennisaw—where Friday night high school football ranks right up there with God and country. This year, the Kennisaw Knights are going for their fifth straight undefeated season, and if they succeed, they'll be legends.

But the Knights' legacy is a heavyweight to carry for Hampton, linebacker and star of the team. On the field, he's so in control you'd think he was able to stop time. But his life off the field is a different story. His mom has a new boyfriend every week. He's drawn to a smart, quirky girl at school who seems totally wrong for a star athlete, and his best friend and teammate is growing uncomfortably competitive.

This thought-provoking novel is the story of a boy whose choices will decide the kind of man he becomes.

TIM THARP lives in Oklahoma, where he teaches at Rose State College. Knights of the Hill Country was his first novel for young adults; he is also the author of The Spectacular Now (a National Book Award finalist), Badd, and Mojo.
“JEALOUSY, RAGE, AND tenderness are wrapped around the story’s core theme of self-discovery. . . . This intriguing work demands an audience.”—Kirkus Reviews, Starred

“The teen’s voice comes in loud and clear, revealing a sensitive, likeable character. . . . Readers will root as much for his team as for Hampton to be true to himself. The dynamic football scenes will draw readers who enjoyed H. G. Bissinger’s Friday Night Lights.”—School Library Journal