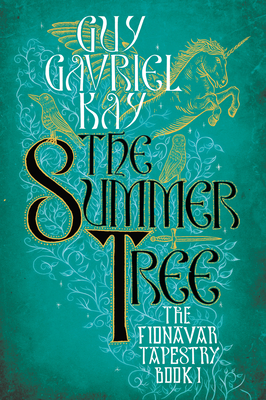 This is book number 1 in the Fionavar Tapestry series.

Taken to a realm of magic and war, five men and women from our world embark on an epic journey in the first novel in Guy Gavriel Kay’s classic, critically acclaimed fantasy trilogy, The Fionavar Tapestry.

It begins with a chance meeting that introduces the five to a man who will change their lives: a mage who brings them to the first of all worlds, Fionavar.

In this land of gods and myth, each of them is forced to discover what they are and what they are willing to do, as Fionavar stands on the brink of a terrifying war against a dark, vengeful god...
Guy Gavriel Kay is the international bestselling author of numerous fantasy novels including The Fionavar Tapestry trilogy, Tigana, The Last Light of the Sun, Under Heaven, River of Stars, and Children of Earth and Sky. He has been awarded the International Goliardos Prize for his work in the literature of the fantastic, and won the World Fantasy Award for Ysabel in 2008. In 2014 he was named to the Order of Canada, the country’s highest civilian honor. His works have been translated into more than twenty-five languages.
Praise for The Fionovar Tapestry

“Kay has delivered such a magnificent...volume that I can’t praise it enough. The Fionavar Tapestry is a work that will be read for many years to come. It is a book that makes one proud to be working in the same genre as its author.”—Charles de Lint

“I’m overwhelmed...The Summer Tree is one of those books that change your perception of the world forever afterward.”—Marion Zimmer Bradley

“Certainly this is one of the very best of the fantasies which have appeared since Tolkien, and I trust it will be recognized as such.”—Andre Norton

“This is the only fantasy work I know which does not suffer by comparison to The Lord of the Rings.”—Interzone

“Can be compared only with Tolkien’s masterpiece. A passionate battle between good and evil...it delights the spirit.”—Star-Phoenix

“Kay's bestselling—and stunning—fantasy trilogy finds its power not in its feats of imagination or world-building (though there are dazzling heapings of both) but from its rootedness in the reality of human emotions and relationships.”—The Globe and Mail

“A grand galloping narrative...reverberates with centuries of mythic and incantory implications—with a little Prince Hal and Falstaff on the side.”—Christian Science Monitor

“The Fionavar Tapestry, when all is said and done, is one of the most beautifully written and moving fantasy trilogies ever written. Those are very large words, but I truly believe this book is large enough to fit into such a reputation.”—Green Man Review