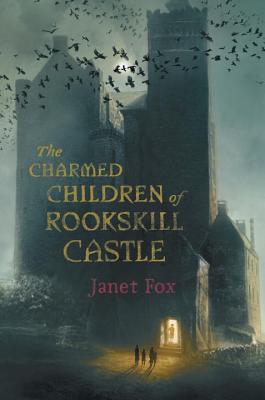 By Janet Fox
$16.99
Not Currently Available to Order

An eerie gothic fairytale with a World War II setting and magic at its heart-- and the recipient of four starred reviews and multiple honors.

Twelve-year-old Katherine Bateson believes in a logical explanation for everything. But even she can't make sense of the strange goings-on at Rookskill Castle, the drafty old Scottish castle-turned-school where she and her siblings have been sent to escape the London Blitz. What's making those mechanical shrieks at night? Why do the castle's walls seem to have a mind of their own? And who are the silent children who seem to haunt Rookskill's grounds? Kat believes Lady Eleanor, who rules the castle, is harboring a Nazi spy. But when her classmates begin to vanish, one by one, Kat must face the truth about what the castle actually harbors--and what Lady Eleanor is--before it's too late.

Selected for the Spirit of Texas Reading Program, a finalist for the Pacific Northwest Booksellers Association Award, and more, this tale of magic and power has charmed readers everywhere.

Janet Fox is a former teacher and a writer of fiction and nonfiction. She is the author of the award-winning Get Organized Without Losing It, written for middle-school children. She has written three young adult novels, Faithful, Forgiven, and Sirens. She is a graduate of the MFA/Writing for Children and Young Adults program at the Vermont College of Fine Arts. Janet lives with her husband in the mountains of Montana.

RAVES FOR THE CHARMED CHILDREN OF ROOKSKILL CASTLE:

* “Wonderfully written . . . Readers will curl up and keep the lights on with this chilling page-turner.”—Booklist, starred review

* “In this intricately plotted thriller . . . . True-to-life protagonists, the skillful interweaving of flashbacks and the chatelaine motif, a masterful final encounter, and a satisfying denouement attest to Fox’s craftsmanship.”—Publishers Weekly, starred review

* “ Fox works a spell of her own, pulling her audience deep into the increasingly nightmarish tale, while creating a stout-hearted heroine who isn't afraid to trust her own mind.”—Shelf Awareness, starred review

“Fox’s story of intrigue and magic is enticing from page one . . . a fascinating and wonderful read.” —VOYA

“[A] cleverly-crafted thriller . . . readers who enjoy historical fiction, science fiction, or horror will not want to miss this book!”—School Library Connections

“An enchanting, ghostly story that had me in its grip until the last page. With her courage, strength, and intelligence, Kat Bateson will become one of the great literary heroines. I rooted for her right through the last page.”
—Jennifer A. Nielsen, New York Times and USA Today best-selling author of The False Prince

“Chilling, creepy, charming . . . a delicious read, full of twists and turns and writing that soars right along with the rooks outside the castle walls.”
—Kathi Appelt, Newbery Honor-winning author

“Fiendishly addicting, with as many twists and turns as the sinister castle that conceals the charmed children and the chilling evil that first ensnared them.”
—Julie Berry, award-winning author of The Scandalous Sisterhood of Prickwillow Place