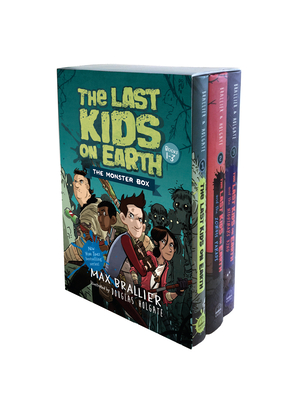 A collection of the first three books in the New York Times bestselling The Last Kids on Earth series. The perfect gift for hours of entertainment and nonstop action and laughs!

Ready for more? Check out The Last Kids on Earth: Next Level Monster Box, for books 4-6!
Max Brallier is a New York Times, USA Today, and Wall Street Journal bestselling author. His books and series include The Last Kids on Earth, Eerie Elementary, Mister Shivers, Galactic Hot Dogs, and Can YOU Survive the Zombie Apocalypse? He is a writer and producer for Netflix’s Emmy-award-winning adaptation of The Last Kids on Earth. Max lives in Los Angeles with his wife and daughter. Visit him at MaxBrallier.com.


Douglas Holgate has been a freelance comic book artist and illustrator based in Melbourne, Australia, for more than ten years. He's illustrated books for publishers including HarperCollins, Penguin Random House, Hachette, and Simon & Schuster, and comics for Image, Dynamite, Abrams, and Penguin Random House.
Praise for The Last Kids on Earth series:

* "A perfect example of what an illustrated novel can and should be."--Kirkus Reviews, starred review

"This series is a must-have for middle grade collections."--School Library Journal

"An apocalyptic adventure with a whole lot of heart."--Kirkus Reviews