A Narrative of a Revolutionary Soldier: Some Adventures, Dangers, and Sufferings of Joseph Plumb Martin (Mass Market) 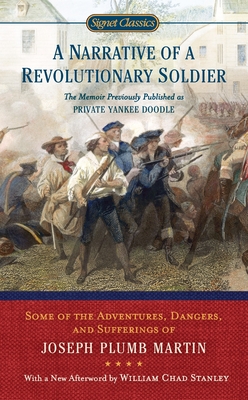 A Narrative of a Revolutionary Soldier: Some Adventures, Dangers, and Sufferings of Joseph Plumb Martin (Mass Market)


Available in Warehouse. Wait for Email Confirmation for ETA
With a new afterword by William Chad Stanley

Here a private in the Continental Army of the Revolutionary War narrates his adventures in the army of a newborn country.
Thomas Fleming is a distinguished historian and the author of numerous critically acclaimed and bestselling novels. His masterpiece, The Officers’ Wives, was an international bestseller with over two million copies sold. His novels Time and Tide and Liberty Tavern were both New York Times bestsellers. He is also the author to the award-winning PBS mini-series Liberty! The American Revolution. A decade ago Fleming was elected a Fellow of the Society of American Historians. He writes frequently for American Heritage Magazine and is contributing editor of the Quarterly Journal of Military History. His most recent non-fiction novel is Duel: Alexander Hamilton, Aaron Burr, and the Future of America. Thomas Fleming lives in New York City.