Alice's Adventures in Wonderland and Through the Looking-Glass (Mass Market) 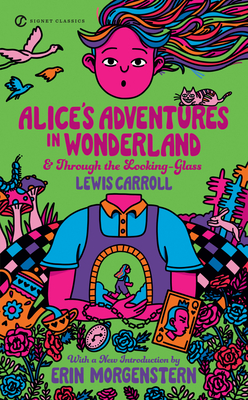 Alice's Adventures in Wonderland and Through the Looking-Glass (Mass Market)


Available in Warehouse. Wait for Email Confirmation for ETA
Young and imaginative Alice follows a hasty rabbit underground and comes face-to-face with some of the strangest adventures and most fantastic characters in all literature.

The mad Hatter, the diabolical Queen of Hearts, the grinning Cheshire-Cat, Tweedledum, and Tweedledee could only have come from that master of sublime nonsense Lewis Carroll. In this brilliant satire of rigid Victorian society, Carroll also illuminates the fears, anxieties, and complexities of growing up. He was one of the few adult writers to enter successfully the children’s world of make-believe, where the impossible becomes possible, the unreal, real, and where the heights of adventure are limited only by the depths of imagination.

With an Introduction by Martin Gardner
and an Afterword by Jeffrey Meyers
and the Original Illustrations by John Tenniel
Charles Lutwidge Dodgson (Lewis Carroll) (1832–98) attended Rugby School for four years and matriculated at Christ Church, Oxford, in May 1850. In 1855, he was appointed mathematical lecturer at Christ Church, a position he held until 1881. Late in the year 1865, he published, under the pseudonym Lewis Carroll, Alice’s Adventures in Wonderland—the Alice of the title being patterned after a daughter of Dean Liddell of the college. In 1869 came Phantasmagoria, in 1871 Through the Looking-Glass, in 1876 The Hunting of the Snark, and in 1883 Rhyme and Reason. During the years in which Lewis Carroll was delighting children of all ages, C. L. Dodgson was publishing mathematical works, the most famous of these being Euclid and His Modern Rivals (1879). Though his authorship of the Alice books was well-known, he shied away from publicity, stating, “Mr. Dodgson neither claimed nor acknowledged any connection with the books not published under his name.”

Martin Gardner (1914–2010) was a science writer who for twenty-five years wrote the “Mathematical Games” column in Scientific American. He authored some seventy books about mathematics, science, philosophy, and literature, including two novels and a collection of short stories. His Annotated Alice and More Annotated Alice were combined into a single Annotated Alice. He also wrote The Annotated Snark and edited The Universe in a Handkerchief, a collection of Carroll’s writings about recreational mathematics, puzzles, ciphers, word play, and games.

Jeffrey Meyers, a fellow of the Royal Society of Literature, is the author of numerous biographies including Samuel Johnson: The Struggle; The Genius and The Goddess: Arthur Miller and Marilyn Monroe; George Orwell: Life and Art—his fifth work on Orwell; and John Huston: Courage and Art. Thirty of his books have been translated into fourteen languages and published on six continents.