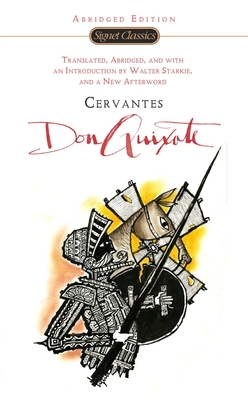 “Don Quixote, a lanky scarecrow of a man with his withered face and lantern jaw, dons his rusty armour and mounts his ramshackle steed, Rozinante. With lance couched he still rides through our lives, followed by his potbellied squire Sancho Panza.”

With these words, Walter Starkie launches the introduction to his highly esteemed translation and abridgment of Cervantes’s great classic—a book that has enchanted generations of readers throughout the world.

Brimming with humor, rich in idealism and earthy common sense, vivid in its characterizations of men and women from every walk of life—nobles, priests, impassioned damsels, simple country girls, rogues, and romantics—Don Quixote, in this zestful translation, will win many new friends.

Miguel de Cervantes Saavedra (1547-1616) found some initial success as a playwright. From 1571 through 1575, he fought with the Spanish fleet and served in garrisons throughout Italy. He was then captured by the Turks in Algiers and held prisoner for five years. Upon his return to Spain, he held various diplomatic and government posts but faced constant financial hardship and served two terms in prison. His fame was secured with the publication of Don Quixote (1605) and its sequel, which was published shortly before his death.Walter Starkie, noted authority on Spanish history and culture, eminent lecturer, scholar and writer, was for more than twenty years a professor at Dublin University. From 1940 to 1955, he was director of the British Institution in Madrid.

“What a unique monument is this book!...How its creative genius, critical, free and human, soars above its age!”—Thomas Mann