After the Reich: The Brutal History of the Allied Occupation (Paperback) 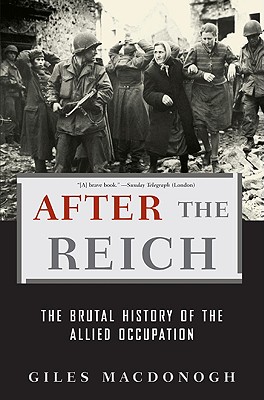 After the Reich: The Brutal History of the Allied Occupation (Paperback)


This title is likely unavailable. Email or call for price and availability.
The shocking history of the brutal occupation of Germany after the Second World War
When the Third Reich collapsed in 1945, Germany was a nation in tatters, in many places literally flattened by bombs. In the ensuing occupation, hundreds of thousands of women were raped. Hundreds of thousands of Germans and German-speakers died in the course of brutal deportations from Eastern Europe. By the end of the year, denied access to any foreign aid, Germany was literally starving to death. An astonishing 2.5 million ordinary Germans were killed in the post-Reich era.
A shocking account of a massive and brutal military occupation, After the Reich draws on an array of contemporary first-person accounts of the period to offer a bold reframing of the history of World War II and its aftermath.

A graduate of Oxford University, Giles MacDonogh is the author of several books on German history and has written for the Financial Times, the Times (London), the Guardian, and the Evening Standard. He lives in London.
"An account of tragic human experience, all too little known, in the words of those who lived through it. It is not only a fascinating story but a unique and valuable historical document."—New York Review of Books

"MacDonogh has written a grueling but important book. This unhappy story has long been cloaked in silence since telling it suited no one. Not the Allies, because it placed them near the moral nadir of the Nazis; not the Germans, because they did not wish to be accused of whitewashing Hitler by highlighting what was, by any standard, a war crime. Giles MacDonogh has told a very inconvenient truth."—Sunday Telegraph (London)

"Giles MacDonogh's shocking new book gives a very different and long overdue alternative view--and all the more sobering for being written in a style that betrays no hint of the author's anger at the appalling atrocities he relates....[A] superb book written by a sympathetic writer in perfect control of his often dreadful material. Overall, MacDonogh has told a story that had to be told and told it very well. The book teaches, in fact, an old and classic lesson: it is better not to start wars, but it is fatal to lose them."—History Today

"A sometimes violent and often disturbing history that prods the reader to think about the choices of conquerors."—Seattle Times