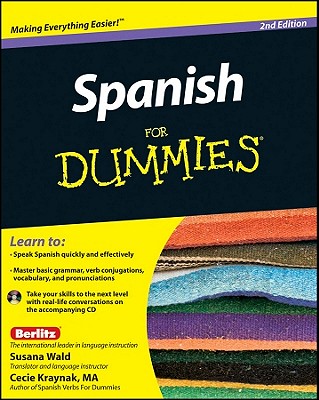 The job market for those who are bilingual is expanding rapidly. Businesses and government agencies are hiring translators; retailers and advertisers are concentrating more energy in targeting the Spanish-speaking; and hospitals and agencies are seeking to overcome language barriers.

Whether you're a student studying Spanish, a traveler gearing up for a trip to a Spanish-speaking country and need to learn the basics, or a upwardly mobile looking to get ahead of the pack in your career by learning a second language, Spanish For Dummies, 2nd edition is your hands-on guide to quickly and painlessly learn Latin American Spanish that includes:

Whether you're looking to learn Spanish for use in the home, class, at the office, or on the go, Spanish For Dummies, 2nd edition has you covered

Berlitz(R) has taught languages to millions of people for more than 130 years. Susana Wald is a writer and literary translator in Hungarian, Spanish, English, and French, and she has taught abroad in Chile and Canada. Cecie Kraynak, MA, has taught and tutored Spanish at the junior high school and college levels for more than 25 years. She is the author of Spanish Verbs For Dummies.